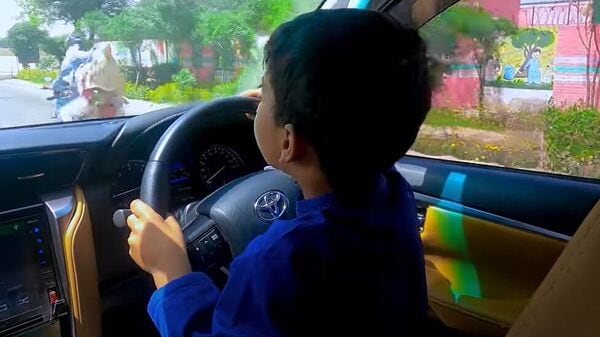 Screengrab from video posted on YouTube by Ayan and Areeba Show

A video of an eight-year-old kid driving a Toyota Fortuner has gone viral. The video is from Pakistan where one can see the boy driving the Fortuner on a dirt road. The video has received more than 13,000 views and mixed responses where some criticised the act calling it dangerous whereas some said the kid has impressive driving skills.

The video has been posted on Youtube by a channel called Ayan and Areeba Show hosted by the boy and his sister. In the video, he is accompanied by his father and sister while he drives the car. The Toyota Fortuner SUV looks pretty new in the video.

In India, Toyota Fortuner SUV is offered with two engine options namely a 2.8-litre diesel unit and a 2.7-litre petrol engine. The diesel engine can generate a power output of 201 bhp along with a peak torque of 500 Nm while the petrol engine can produce power of 164 bhp and maximum torque of 245 Nm. Both these engines have been paired with either a six-speed manual or a six-speed sequential gearbox. This SUV has been mainly designed for city roads and occasional off-road adventures.

Toyota Motor also recently increased the prices of Innova Crysta and Fortuner across all the variants in India. The increased prices range from ₹36,000 to ₹1.20 lakhs depending on specific models and their variants. The steepest price increase has been observed in Toyota Fortuner's Legender 4x4 SUV which will now come at a price of ₹44.63 lakhs (ex-showroom).