Volkswagen has lost production of a high six-digit number of vehicles so far due to the squeeze on chips.Its luxury brands Audi and Porsche helped limit the loss.
By : Bloomberg
| Updated on: 29 Jul 2021, 06:07 PM 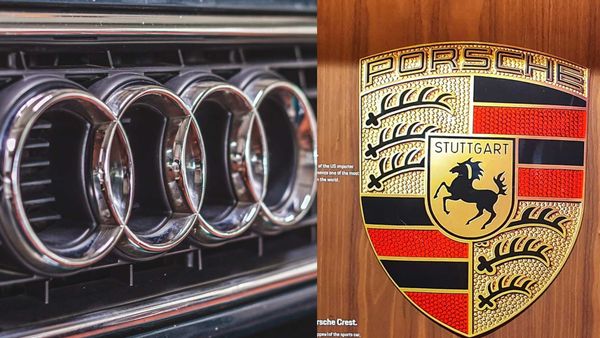 File photo of logos of Audi (L) and Porsche

Volkswagen AG’s Porsche and Audi luxury brands helped limit the fallout from the global chip shortage, allowing Europe’s biggest carmaker to raise its outlook even as it cut expectations for deliveries this year.

The carmaker lifted its expected operating return on sales for the second time this year to between 6% to 7.5%. That’s still trailing VW’s first-half result of 8.8% when higher prices for cars and churning out its most lucrative models offset the scarcity of semiconductors.

“We got through quite positively during the first half but we are going to see some hits now during the third quarter because production is really constrained," Chief Executive Officer Herbert Diess said in an interview with Bloomberg Television. “We are confident we can recover during the fourth quarter."

VW is joining peers including Daimler AG and Stellantis NV with robust results, bucking chip issues that have stymied manufacturing worldwide along with lingering restrictions related to the pandemic. Solid profits are pivotal to financing VW’s plans to phase out combustion engines and push into software, mobility services and automated driving features. Tesla Inc., which VW has vowed to unseat as the leading EV maker, has been picking up speed as well with eight straight quarters of profit and margins that dwarf those of incumbent rivals.

VW’s adjusted operating profit of 11.4 billion euros ($13.5 billion) in the first six months was ahead of the 10 billion euros it reported in the same period of of 2019, before the pandemic hit. Faced with limitations on how many production lines they can keep running, automakers have shifted output to their most lucrative vehicles, and lower inventories are enabling manufactures to command higher prices.

Automotive net cash flow climbed to around 10.2 billion euros, providing VW with robust financial muscle to finance investments. The premium Audi and Porsche brands posted record deliveries for the first half of the year and operating margins of 11% and 18% respectively.

VW has lost production of a high six-digit number of vehicles so far due to the squeeze on chips, and the fallout on profit might become more pronounced in the coming months. The shortage has contributed to a slow start for VW’s important ID.4 electric SUV in China, stoking concern about the company’s operations in its largest sales region.

The carmaker in March mapped out plans to build six battery factories in Europe, alongside a slick presentation on battery technology and a model lineup of about 50 purely battery-powered vehicles by 2030. Investors have cheered the industry’s most comprehensive push to transition from combustion engines, bidding up VW’s common shares more than 60% this year.

VW has budgeted 73 billion euros for electrification and digital offerings from this year through 2025, half of overall spending. As part of the expansion of services, the company on Wednesday reached a deal to buy back Europcar Mobility Group for 2.51 billion euros.

“We see the main benefit with the rental car business as the best starting point for offering mobility services," Diess said.