Skoda Slavia is the more affordable option between the two but Volkswagen Virtus is the newer model looking at finding favour among customers.
By : HT Auto Desk
| Updated on: 09 Jun 2022, 03:55 PM 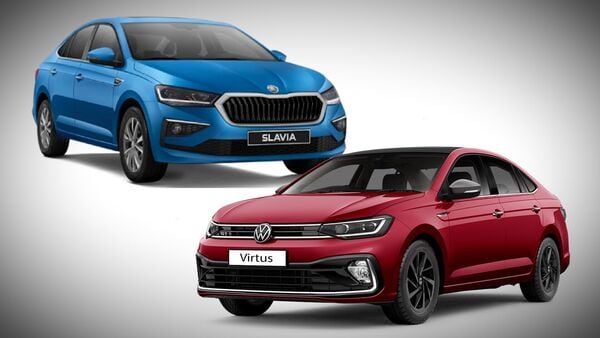 Volkswagen Virtus was officially launched in India at a starting and introductory price of ₹11.21 lakh. The Volkswagen Virtus is the latest mid-size sedan to hit the Indian car market and has been launched in two broad trims and in multiple variants. While it has a number of rivals to fight against - the list primarily includes Maruti Suzuki Ciaz, Honda City and Hyundai Verna, it would also go head-on against technical cousin in the form of Skoda Slavia.

Slavia is the other newest mid-size sedan in the market and has fared reasonably well. Both Slavia and Virtus are based on the MQB-A0 platform and part of Volkswagen brand's India 2.0 project. As such, both sedans have the same proportions and similar technical specifications even if both differ in terms of exterior and cabin styling.

There is also a difference between the pricing structures of Skoda Slavia and Volkswagen Virtus, much on the lines of how it was when the Skoda Kushaq and Volkswagen Taigun were launched.

Virtus is more expensive of the two sedan models with the Comfortline starting at ₹11.21 lakh. The most affordable Slavia is the Active variant with a price sticker of ₹10.69 lakh. The most affordable Virtus with an automatic gearbox - Highline AT - is priced at ₹14.27 lakh while its Skoda counterpart is Ambition variant of the Slavia, priced at ₹13.59 lakh. The most premium variant of the Virtus with the 1.0-litre engine under the hood - Topline AT - is at ₹15.71 lakh while the Slavia Style AT variant is at ₹15.39 lakh.

Both Virtus and Slavia are also offered with a more capable 1.5-litre TSI for enthusiasts but Skoda has the trim with both manual as well as seven-speed DCT gearbox while there is no manual option with this engine on the Virtus. The Virtus Performance Line trim has one variant - GT Line - and is priced at ₹17.91 lakh, around ₹12,000 more than the Style variant of Slavia with the same engine and DCT unit. The Style variant of Slavia with the turbo TSI but with manual transmission is significantly more affordable at ₹16.19 lakh.

Both Virtus and Slavia have a lot in common but also stand out with their unique set of highlights. Virtus styling is more on the sportier lines while Slavia has a slightly more mature design language - outside and in the cabin too. But both these models are looking at combining to revive the faltering sedan space in the country and could also mount a challenge to the dominance of mid-size and compact SUVs here.

(All prices mentioned above are ex-showroom)