Volkswagen sales top Tesla in Europe after incumbents fight back

Volkswagen sold 49,704 fully electric autos across Europe in December, almost double Tesla’s registrations in the region, according to a market researcher.
By : Bloomberg
| Updated on: 28 Jan 2021, 05:12 PM 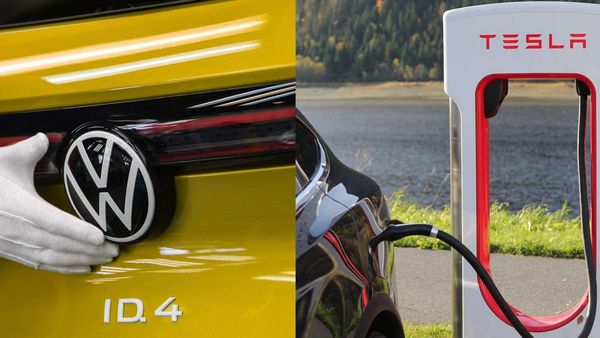 File photo of Volkswagen ID.4 and a Tesla EV

The German giant sold 49,704 fully electric autos across Europe in December, almost double Tesla’s registrations in the region, according to market researcher Jato Dynamics. VW’s new ID.3 beat the Model 3 and was the second best-selling car overall for the month.

In a year when Tesla was one one of the world’s hottest stocks and surpassed VW and Toyota Motor Corp. to become the most valuable automaker, its registrations across Europe fell 12%, according to Jato. Pressure to meet tougher carbon-dioxide emissions standards motivated established automakers as much as keeping up with Musk, who boosted global deliveries by opening a plant in China and rolling out the new Model Y.

VW Chief Executive Officer Herbert Diess goaded Musk earlier this month by writing in his debut post on Twitter that he was coming for Tesla’s market share. While the ID.3 has gotten off to a strong start, its introduction was postponed for months by software issues. The delay contributed to VW failing to comply with CO2 limits last year and may lead to a fine of more than 100 million euros ($121 million).

Tesla plans to start production at its first factory in Europe later this year. The carmaker began importing Model 3s into the region from its new Shanghai plant toward the end of 2020.