As many as five Tesla 3 models are up for grabs, as popular YouTuber launches drive to rope in voters to register names for the upcoming elections.
By : HT Auto Desk
| Updated on: 05 Oct 2020, 08:32 AM 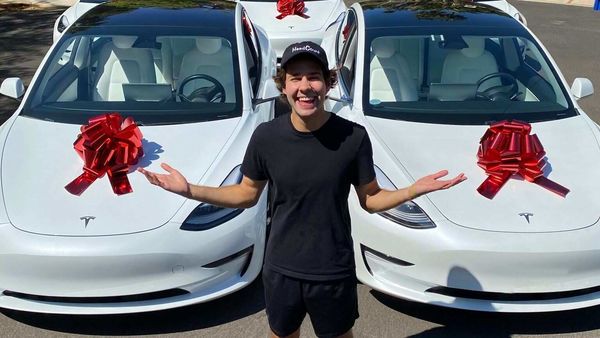 Photo shared by YouTube influencer with Tesla Model 3 cars to be given away in an online drive to register voters for the upcoming US presidential elections. (Photo courtesy: Twitter/@DavidDobrik)

Freebies to woo voters during elections is not a new idea in India. While it helps boost number of voters lining up at polling stations. But such freebie offers are usually made by a political party, which hopes to use such schemes to garner as much vote as possible.

In the United States, however, the idea has been slightly modified to simply encourage more voting. With the US presidential elections barely a few weeks away, and presidential debates between incumbent Donald Trump and his challenger Joe Biden is heating up, one online influencer thought of one such scheme to ensure maximum participation of voters in these elections.

Popular YouTuber David Dobrik has announced that he will give away free Tesla cars if people register themselves to vote this year. In partnership with voting and democracy non-profit agency HeadCount, Dobrik is offering as many as five Tesla Model 3 cars for lucky winners. To enter the race to win free Teslas, the participants only have to check if they are registered to vote and confirm.

The announcement of the competition has already attracted a lot of people. Dobrik tweeted that within 24 hours of the announcement more than one lakh Americans have registered to vote.

In 24 hours, over 100,000 Americans have registered to vote through our Tesla giveaway led by YouTube creator @DavidDobrik. It's extra inspiring to know that David is a "Dreamer" (DACA recipient) who can't vote in the U.S, but has used his platform to help others. #GoodToVote pic.twitter.com/1g9OXiYtlY

Earlier Dobrik had posted a video on TikTok giving an idea about the competition. The idea was apparently influenced by a user who suggested Dobrik’s influence could help more people to register to vote. Ironically, Dobrik himself cannot register to vote in the US elections since he was born in Slovakia and was went to US as a child with his parents.

Giving away 5 Teslas to those who are ready to vote!!! https://t.co/9IVVuKdrbw pic.twitter.com/4qWLjL8RuV