Ayushmann Khurrana will campaign for the Toyota Urban Cruiser.This will be a part of Toyota’s overall marketing strategy for this year.
By : HT Auto Desk
| Updated on: 16 Sep 2020, 02:26 PM 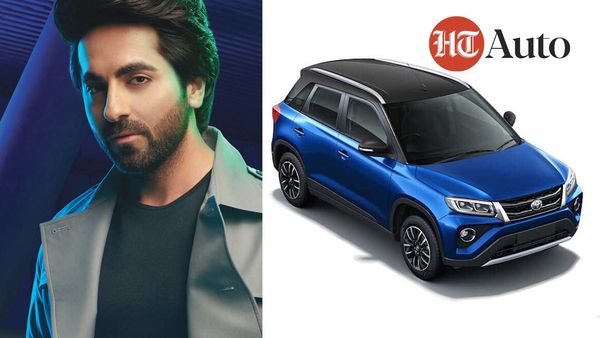 Bollywood actor Ayushmann Khurrana has been named as the brand ambassador for Toyota Urban Cruiser SUV.

The Urban Cruiser sub-compact SUV will be Toyota's second spin-off of a Maruti car, the first one being the Baleno hatchback which is sold as the Glanza in the Indian market.

The new Urban Cruiser SUV comes powered from a new K-Series 1.5 litre, four-cylinder petrol powertrain. It is going to be available in two gearbox choices - Manual Transmission (MT) and Automatic Transmission (AT). Toyota has revealed that all the AT variants will feature advanced Lithium-Ion battery along with an Integrated Starter Generator.

Sharing his thoughts on the announcement, Naveen Soni, Senior Vice President, Sales and Service, Toyota Kirloskar Motor, said, “Ayushmann Khurrana is an exemplar of a self-made actor, someone who is extremely versatile and respected by critics and audience alike. His story is an inspiration to many young people and resonates the spirit of the all-new Urban Cruiser. Toyota as a brand has a similar story – we are one of the largest, most respected automobile companies in the world constantly pushing the boundaries. We are innovative and introduce products and services that are relevant, valuable and truly connects with our customers. The all-new Urban Cruiser is one such offering for those who aspire to own a Toyota SUV at an early stage in their lives."

(Also read: Top features of Toyota Urban Cruiser to look out for)

Talking about this association with Toyota Urban Cruiser, Ayushmann Khurrana said, “When people ask me about my journey, the love and respect I have earned in the entertainment industry, I always say ‘Respect is simply an outcome of what I have done’. Therefore, I love the idea of ‘respect’ being the mantra of the Urban Cruiser. I am thrilled to be associated with Toyota Urban Cruiser and look forward to sharing more details about the young urban SUV".