The rendering of the Jeep Wrangler features a completely flat roof and has pronounced wheel arches just like all previous generations of the Wrangler.
By : HT Auto Desk
| Updated on: 10 May 2022, 10:45 AM 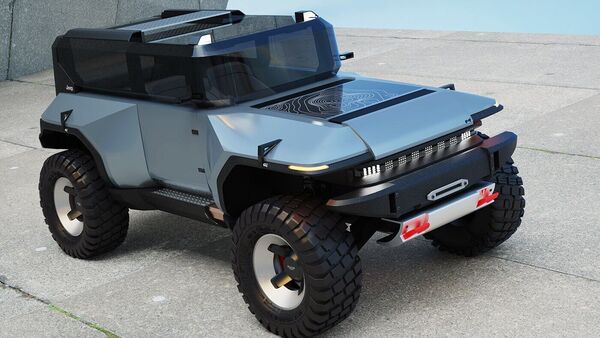 Jeep Wrangler rendering looks like a futuristic vehicle from another planet

Jeep currently sells the fourth-generation of the Wrangler in the market and will likely continue to sell it until at least the end of the decade. Yet, an automotive enthusiast has taken a futuristic plunge to design a rendering of a new-generation model of the Wrangler that looks like it belongs to another planet. Designer Arjun Kurunji's Jeep Wrangler is a two-door model that has an intriguing front end with an LED light bar, a winch, and bright red tow hooks.

The rendering of the Jeep Wrangler features a completely flat roof and has pronounced wheel arches just like all previous generations of the Wrangler, though now more neatly incorporated into the rest of the bodywork. The futuristic Wrangler stands out due to the upright windshield, curved edges, and narrow side windows.

The roof features LED driving lights and has a small roof rack, as well as a large sunroof. Over at the rear, the Wrangler looks just as bold as the front and includes an LED light, a skid plate, tow hooks, and flared arches. Further accentuating the eye-catching elements of the vehicle’s design are the five-spoke silver and black wheels, rugged off-road tires, and the side steps.

While the long-term future of the current Jeep Wrangler is not known, an all-electric version is in the works and is expected to hit the market by 2024. And if Jeep continues to sell the Wrangler beyond 2030, it will probably only be offered with an all-electric powertrain in most markets. Theoretically, this could allow Jeep to change its design and create something different from any other vehicle currently present in the automaker's lineup.