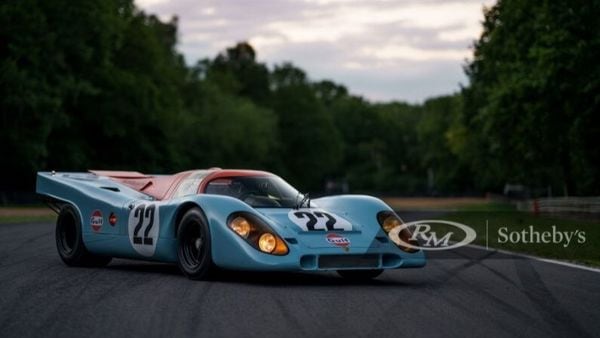 The 1970 Porsche 917K that was driven by Steve McQueen in the classic film 'Le Mans' will be for auction next month and reports suggest that the car could be sold for more than a whopping amount of $18million which is approximately ₹134 crores.

According to Motor Authority, the 917 Porsche was one of the most successful sports cars from Porsche as it dominated that European racing scene. This sports car with chassis 026 was one of three cars entered by JW Automotive at the 1970 24 Hours of Le Mans. It was driven by Mike Hailwood and David Hobbs. However, Hailwood hydroplaned the car which led to the elimination of the 917 Porsche from the race on the 50th lap.

Following this, the car was repaired by Porsche where it was re-bodied as a 917 Spyder. Its chassis was also renumbered as chassis 031. Then the sportscar raced in the European InterSerie Championship from 1971 to 1973 before retiring from the competition in 1974. The North American Can-Am Series also saw Porsche 917's success.

The sports car got its limelight moment when actor McQueen drove it past the finish line in the movie Le Mans’. All versions of this sportscar featured a mid-mounted flat-12 engine but had different bodywork. The 917K with chassis 026 featured shortened rear bodywork. This feature cured the aerodynamic issues that came along with its long-tail version. The 917 Porsche has passed through multiple collections before it was restored to its 1970 Le Mans’ specification.

The current owner of the car who remains anonymous bought it for around $4 million in 2010. The 1970 Porsche 917K will go for auction and will be on display in Monterey, California from August 13 to August 14. As per reports, another Porsche was also sold for about $14 million at a California auction in 2017.