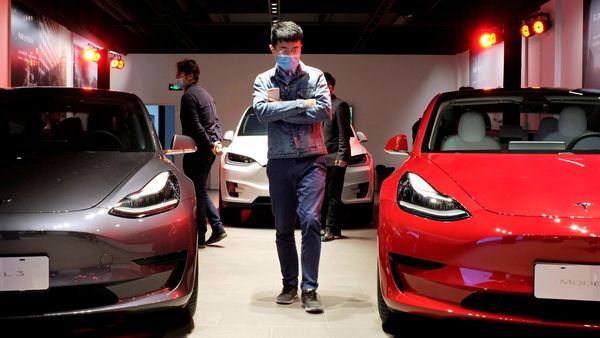 The Chinese electric-vehicle pioneers who have ridden Elon Musk’s coat-tails to riches have lost around $10 billion in recent weeks as Tesla Inc.’s staggering rally goes into reverse.

The U.S.-listed shares of Xpeng Inc. have plunged 33% from their recent highs, while Li Xiang’s Li Auto Inc. is down 27% from its early-January peak. Nio Inc. has slumped 22% from peak to trough. Last year, Xpeng more than quadrupled from its IPO price and Li Auto more than tripled as speculative money poured into the sector, led by Tesla’s blistering 743% rally.

Xpeng and Li Auto are still trading at more than double the price they went public at last year, while Nio surged more than 1,100% in 2020, beating even Tesla’s stratospheric rally.

“EV stocks have priced in big growth over a long timeframe, leaving them particularly vulnerable to shifts in sentiment," said Robert Cowell, a Shanghai-based equity research analyst of 86Research. “Also competition is probably a part of it. There can only be a few market leaders in the long term."

The combined fortune of the three tycoons who founded the companies -- He Xiaopeng, Li Xiang and Bin Li has declined about $10 billion from January highs, according to the Bloomberg Billionaires Index.

The damage has also spread to the Hong Kong-listed shares of China Evergrande New Energy Vehicle Group Ltd., which have shed 23% this week. BYD Co., the Chinese electric-vehicle manufacturer backed by Warren Buffett, has fallen 18% from its recent high.

The slide comes as Tesla shares wiped out their year-to-date gains Tuesday and briefly traded below the level where they were when the electric-car maker entered the S&P 500 Index in December.

While the selloff was fueled in part by Musk’s comments that the price of Bitcoin seems “high," there are other factors that may also be taking the shine off EV makers, including a continuous stream of EV development news from traditional automakers such as General Motors Co. and Ford Motor Co., as they prepare to go all in on the electrification race.

Hyundai Motor Co. earlier this week unveiled its Ioniq 5 electric car, saying it aims to sell 70,000 of the vehicles this year, rising to 100,000 next year.