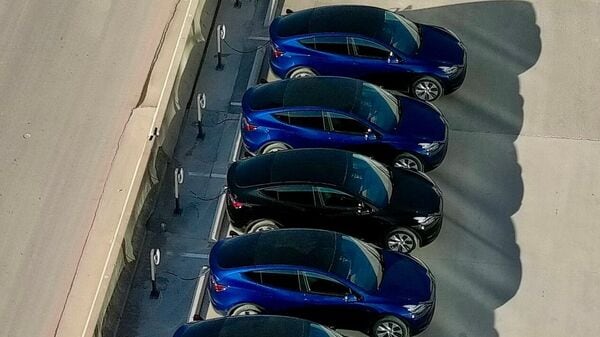 Tesla has recalled 5,78,607 electric vehicles in the United States as pedestrians are not able to hear the warning sound of the approaching car because of the loud music or other sounds played in the EV's Boombox feature, informed a US regulator.

According to a Reuters report, the EV major has issued a recall of some 2020-2022 Model S, Model X, Model Y, and 2017-2022 Model 3 electric vehicles as the Boombox feature in these cars allows sounds to be played through an external speaker while the EV is in motion and that may have created an obstruction in the Pedestrian Warning System sound. National Highway Traffic Safety Administration (NHTSA) said they fail to comply with a federal motor vehicle safety standard on minimum sound requirements for EVs.

(Also read | Tesla wants to roll out ‘Chinese-style cars’. But what does that even mean?)

Tesla will perform an over-the-air software update that will disable the Boombox functionality when the vehicle is in Drive, Neutral and Reverse modes, stated the report. The EV company said it introduced the Boombox in December 2020, and NHTSA issued an information request in January 2021. There were several virtual meetings on the issue over subsequent months.

Following this, NHTSA upgraded an investigation into the issue in September, stated Tesla. In October, the electric automaker defended tests and rationale used to determine Boombox’s compliance, however, it ultimately agreed to a recall after two days of meetings last month.

Tesla has issued about 10 recalls in the US over the last four months including four recalls in the last two weeks. The EV company has come under increasing scrutiny from the NHTSA. Tesla has mentioned it was not aware of any crashes, injuries or fatalities related to the vehicle alert issue that led to the latest recall.