Home Auto News Tesla Plans To Build Its Fifth Gigafactory, But It's Not In India

Tesla plans to build its fifth gigafactory, but it's not in India

Tesla's latest quarterly report has enough hints that after China and Germany, the EV maker is likely to return to US to find the location for its next facility.
By : HT Auto Desk
| Updated on: 27 Oct 2020, 14:57 PM 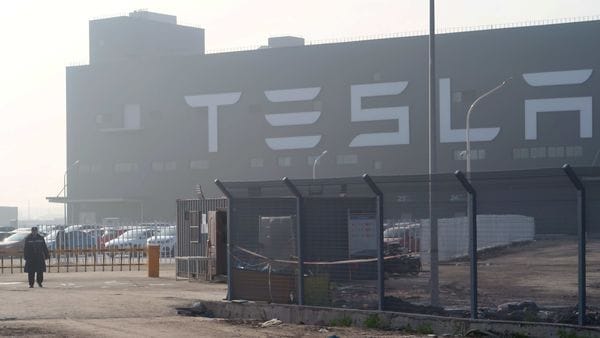 Tesla's fifth gigafactory is most likely to come up in the United States. (File Photo)

After Tesla CEO Elon Musk confirmed the electric vehicle manufacturer's India entry 'next year for sure', there has been talks of where the company is likely to set up its base, if at all. Few state governments have already invited Tesla to use their lands for manufacturing electric vehicles, but nothing has been finalised yet officially.

Some time ago, Elon Musk had said that Tesla is working on another gigafactory, its fifth around the world. Responding to queries on Twitter, the Tesla CEO had hinted that the second factory will be in Asia, but outside China.

Both developments had raised hopes that Tesla may have fixed its eyes on India to expand its electric vehicle market. However, recent developments indicate that any such thing is still far from reality.

Tesla's most recent quarterly report suggests that the EV manufacturer is indeed planning for a fifth gigafactory. But the location is likely to be in the United States, not Asia, for the time being.

According to the company’s 10-Q document released for the third quarter, the carmaker is yet to decide the location for the next gigafactory, but has made it clear that it will be in the US. The report also shows that the two cars that Tesla plans to build at this facility is the Roadster and Semi truck.

The Gigafactory 3 in China is Tesla's only operational facility currently across the world. The sprawling 9,300,000-square feet facility is currently used to produce Tesla Model 3 sedans.

Tesla plans to expand its lineup in China by offering a locally built Model 3 sedan with a longer driving range. Later, Tesla also aims to produce its new Model Y crossover from this facility as well.

Musk has already confirmed that Tesla plans to come out with a smaller and more affordable EV than the Model 3 and this could be the perfect product to unleash in a market such as India.

Tesla's entry could come at a time when Prime Minister Narendra Modi is increasingly becoming focussed on promoting the use and manufacture of electric vehicles. However, since Musk's tweet on entering India, there has been no further word on Tesla's India plan yet. It also remains to be seen in what capacity does Tesla want to enter one of the largest automobile markets, where electric vehicles are still not mainstream and the infrastructure in its nascent stage.