Tesla Supercharging stations will allow free of cost charging before 10 AM and after 7 PM at 76 stations across several US states.The scheme will be valid between December 23 and December 26.
By : HT Auto Desk
| Updated on: 19 Dec 2021, 06:00 PM 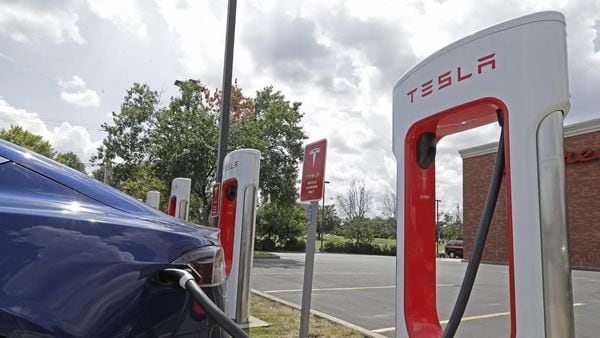 Tesla is offering free Supercharging for electric vehicles during off-peak hours for the holiday season in the US in order to help curb traffic at charging stations, Electrek reported. The free scheme has been initiate by the EV make as the holidays usually prove to be a tough time for its Supercharger network.

Tesla Supercharging stations will allow free of cost charging before 10 AM and after 7 PM at 76 stations across several US states between December 23 and December 26. Most of these locations include travel routes between major centers where there is high concentration of Tesla owners.

This is especially true for California, which is one of Tesla's biggest markets per capita and where there’s the largest concentration of the brand's electric vehicles globally. In 2018 during Thanksgiving holiday, and post the launch of Model 3 sedan, some owners in popular routes of California experienced an extremely long waiting time to get a charge at the Supercharger locations.

Since then, the EV company has been experimenting with discounted Supercharging rates so as to encourage people to travel during off-peak times during holidays. While the initiative has been successful at times, there still happen to be times when some Supercharger stations experience long waiting lines for owners to get a charge. This increases the struggle of owning an electric vehicle and isn't a good thing for the auto industry.

This time, Tesla is bringing back its off-peak hour charging scheme but it is free instead of being discounted. With this, the EV maker is hoping to encourage more EV owners to travel at off-peak hours on holidays, helping lessen the burden on its Supercharger stations. And this time the program is being extended to more states in the US for Christmas travel days.