In June, 14,976 China-built Teslas were registered in the country, according to data from state-backed China Automotive Information Net. That’s a 32% increase from May and the highest monthly number so far for the carmaker.
By : Bloomberg
| Updated on: 17 Jul 2020, 10:40 AM 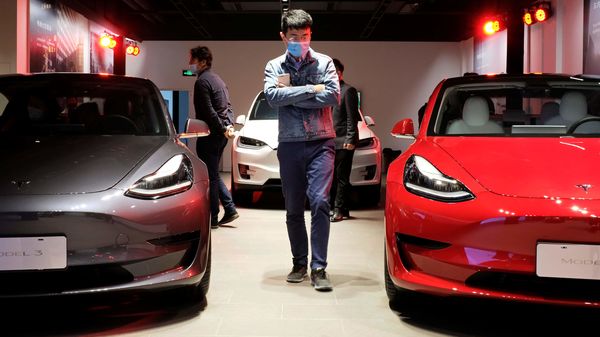 Tesla Inc. kept gaining users in China last month, with registrations of its electric vehicles jumping to a record in the world’s largest market as the coronavirus outbreak receded.

In June, 14,976 China-built Teslas were registered in the country, according to data from state-backed China Automotive Information Net. That’s a 32% increase from May and the highest monthly number so far for the carmaker, which is ramping up output after starting deliveries from its Shanghai plant around the beginning of the year.

While the broader Chinese auto market is recovering slowly from a two-year slump, wealthier buyers are drawn to Tesla’s brand cachet. The EV market leader’s sales now approach a quarter of the total tally for the category, the China Passenger Car Association said this month, making life difficult for a slew of local upstarts trying to get their businesses off the ground. Through June, there were 49,761 Teslas registered in China.

Success in China is crucial to Palo Alto, California-based Tesla’s valuation. Its shares have more than tripled this year partly on expectation of rising sales beyond its domestic market. The company displaced Toyota Motor Corp. as the world’s most valuable automaker this month, highlighting investor enthusiasm for its attempt to transform an industry that’s relied on internal-combustion engines for more than a century.

Tesla will deliver nearly 4 million vehicles in 2025, including grabbing about 7% of China’s total car market, Piper Sandler analyst Alexander Potter predicted in a note this week as he raised his price target to $2,322. That implies a further upside of more than 50% for the stock over the next 12 months.

Yet competition in China is getting tougher. Local EV rival NIO Inc. has been energized by a capital injection from a regional government and a fresh credit line from six banks, while global peers including BMW AG and Mercedes-Benz maker Daimler AG are bringing out new models.

Cars built at Tesla’s Shanghai plant -- its first outside the US -- have made up the vast majority of Tesla registrations in China since opening. The company is building Model 3 sedans at the site and is preparing to assemble Model Y compact SUVs there.