Tesla issues recall for 1,30,000 EVs in US on touchscreen display malfunction

Tesla issued a recall of about 1,30,000 electric vehicles  following a complaint of overheating that can lead to a malfunctioning of the centre touchscreen display.
By : HT Auto Desk
| Updated on: 10 May 2022, 08:45 PM 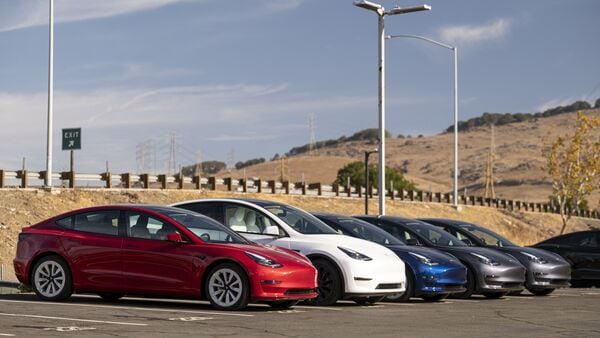 Tesla has issued a recall of about 1,30,000 electric vehicles in the United States following a complaint of overheating that can lead to a malfunctioning of the centre touchscreen display. The recall constitutes all Tesla EVs manufactured in 2021 and 2022. According to the National Highway Traffic Safety Administration (NHTSA), Tesla will provide an over-the-air software update to resolve the issue.

The NHTSA informed that the overheating of the infotainment system's CPU can prevent the centre screen from displaying images from the rearview camera, warning lights and other information. Last month, Tesla recalled 48,000 units of its Model 3 Performance vehicles in the United States due to a faulty Track Mode that may not display the speedometer.

Tesla also issued a recall of about 5,94,717 electric vehicles that included Tesla Model 3, Model Y, Model S and Model X produced in varied years due to a Boombox feature that failed to comply with federal rules on pedestrian warning sounds. The units of Model 3 EVs affected in this callback have been manufactured between 2017 to 2022 while the affected units of Model Y have been produced between 2019 to 2022 and the problematic Model S units have been built from 2020 to 2022. The affected Tesla Model X units have been produced from 2020 to 2022.

Earlier, Tesla had also recalled another batch of Model X EVs due to an issue with airbags. In these electric vehicles, if a front passenger or the driver-side windows are lowered, the front-row curtain airbag may ‘interact’ with the A-pillar trim during the deployment reducing the effectiveness of the airbags.