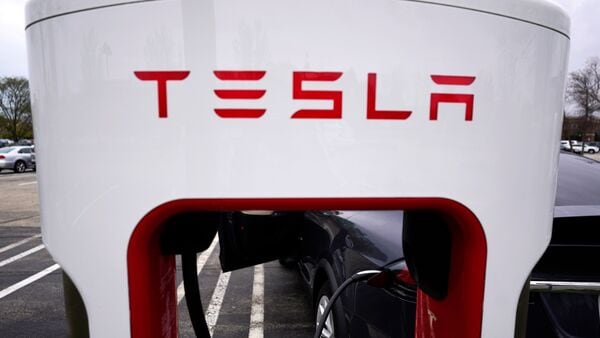 File photo of Tesla Supercharger used for representational purpose only

EV maker Tesla has halted production at its Shanghai plant due to issues with supplies, Reuters reported, citing two sources. The production suspension comes just three weeks after the automaker partially resumed production at the plant on April 19 following a 22-day closure due to the city's Covid-19 lockdown. This reflects the uncertainties of keeping manufacturing going as China battles the coronavirus pandemic.

At present, it is not known when the supply issues can be resolved and when can Tesla resume production while Shanghai is now in its sixth week of lockdown, the report stated. The automaker's suppliers facing issues is wire harness maker Aptiv which had to stop shipping supplies from a plant that supplies Tesla and General Motors after infections were found among its employees.

The production disruption comes at a time when Tesla was aiming to increase output at its Shanghai plant to 2,600 cars a day from May 16 as it seeks to restore production to levels before the lockdown. The disruption to Tesla's Shanghai plant has been one of the highest profile consequences of China's measures to control its biggest Covid-19 outbreak, which has also crimped consumption of vehicles.

The country's auto association last week said that it estimated auto sales in China dropped 48% in April as zero-Covid lockdowns led to shutting down of factories, limited traffic to showrooms and put the brakes on spending.

Last month, Tesla reported better-than-expected first-quarter results on the back of strong demand for its electric vehicles, and despite the coronavirus outbreaks. The company's CEO Elon Musk has predicted that the output will grow at a fast rate for the rest of the year despite supply-chain woes. However, the company cautioned that production remains constrained by shortages and rising cost of key components due to global bottlenecks on supplies of parts such as semiconductors.