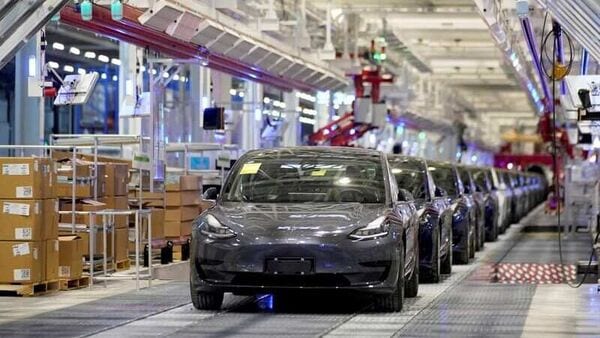 File photo of Tesla in Shanghai.

With plans to take its production capacity to before the recent lockdown phase in Shanghai due to a surge in Covid-19 cases, Tesla has been following a closed-loop system for its factory workers by making them stay inside the EV plant in a dormitory style. Tesla has planned to follow this system till mid-June and now according to reports, Tesla will shift its workers to quarantine at a military camp and a few unused factories in and around its Shanghai Gigafactory.

Tesla will ferry its workers using buses to these vacant buildings and the campsite. The Tesla workers will also be provided with mobile restrooms and showers. It has also reportedly been directed that the second-shift factory workers of the EV company will have to quarantine for about 48 to 72 hours before they enter the manufacturing unit's closed-loop system. Since the implementation of the current loop setup, the Tesla workers have been covering 12-hour shifts six days a week.

It has been reported earlier that Tesla has aimed to run two shifts 24-hours a day to push the production number back to 2,100 cars a day as in normal times. Apart from strict lockdown protocols that made Tesla pause production a couple of months ago, the EV company also had to halt work due to supply issues. The company had stated it faced a shortage of wire harnesses due to which it was compelled to stop manufacturing temporarily.

Tesla resumed production on April 19 and since then has been following the closed-loop system in its factory. Tesla plans to continue this set-up till June 13 as informed by sources earlier.

Another previous report had shared Tesla's plans to establish a second Gigafactory in Asia. The company is currently discussing the plans with the Indonesian government to set up this new EV production unit as well as a battery production unit.