The doors of Tesla EVs are electronically operated in normal circumstances, however, Tesla EVs also come with an in-built mechanical release system for emergencies.
By : HT Auto Desk
| Updated on: 29 May 2022, 02:50 PM 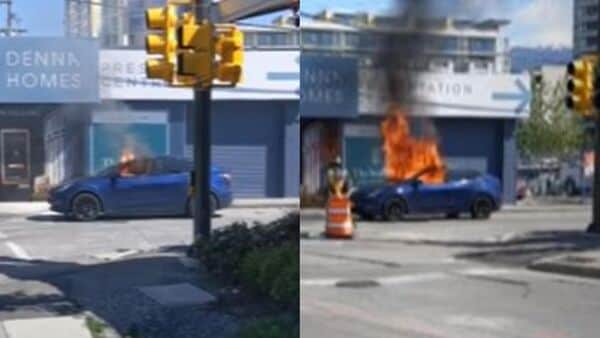 File photo of the Tesla Model Y that caught fire in Canada.

The National Highway Traffic Safety Administration of the United States has requested Tesla to provide information about the recent incident of a Model Y catching fire in Canada while the electric vehicle was on the move. A previous report stated the Tesla Model Y SUV caught fire and the driver of the EV managed to escape without any injuries.

According to a Reuters report, the NHTSA said it is aware of this electric vehicle catching fire and has reached out to Tesla for more information. Tesla is yet to reply to the request as of now. The incident occurred while Jamil Jutha was driving the Tesla Model Y which the individual reportedly bought eight months back. According to the driver, the electric vehicle showed some errors and suddenly shut down. Jutha reportedly said the battery started smoking following which the electric car went up into flames. The owner of the electric vehicle also added that in order to escape, he had to smash the window by kicking it. “Everything stopped, the power didn't work. The door didn't open," he was quoted.

It has been informed earlier that the doors of Tesla EVs are electronically operated in normal circumstances. Though, these electric vehicles from Tesla also come with a mechanical release system that has been built in for emergencies. Regarding the former incident, the driver did mention that it was not easy for him to find the emergency release system at that moment because the situation became very stressful.

The safety agency said it is also aware of another fire incident involving a Tesla Model 3. This incident took place in California and the electric car caught fire while it was parked. The NHTSA has sought information regarding this incident from Tesla as well.