Tesla facility in Shanghai is one of its largest and rolls out more than 2,000 units each day.Shanghai is one of several cities in China which has been reporting significant rise in positive Covid cases.
By : HT Auto Desk
| Updated on: 16 Mar 2022, 12:41 PM 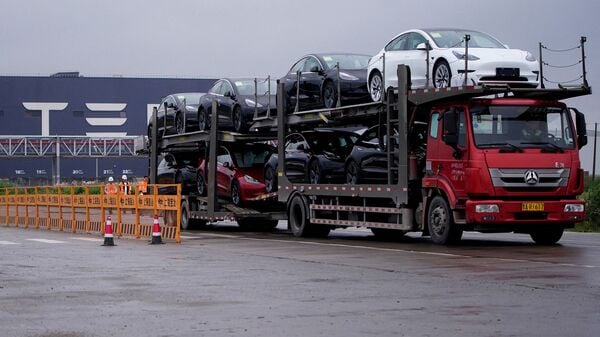 File photo: A truck transports new Tesla cars at its factory in Shanghai.

Tesla has reportedly stopped work at its Shanghai facility in the wake of curbs announced in the city - and in many other parts of China - in order to arrest the rising number of Covid-19 cases in the country. The Shanghai facility is a major base for Tesla from where it manufactures its electric vehicles, both for the local market as well as for exports to several European markets and Japan.

The rapidly rising number of Covid-19 cases in China - a new variant is being blamed - has cast a dark shadow over several cities once again. Tight restrictions and curbs have been enforced in cities like Shanghai, Changchun and Shenzen. A Reuters report, referring to an internal Tesla notice, has informed that the American EV giant has ordered a stop in work for two days. The factory, also called Gigafacgtory 3, is home to popular Tesla cars like Model 3 sedan and Model Y SUV.

The decision to halt work is likely to impact numbers - both production and sales, but may well be the only option in view of the significant rise in positive coronavirus cases in China. The facility managed to deliver over 56,000 EVs in February, including over 33,000 meant for exports. It is not yet clear if Tesla has a firm plan of making up for the numbers once production does resume.

China has reported more positive coronavirus cases this year than it did in all of 2021. Mass testing is being carried out in severely affected cities but daily way of life and factory production in many parts is now - and once again - stuttering.

Automakers here are likely to once again face hurdles. Toyota and Volkswagen are in separate joint ventures with local firm BYD and both brands have reported pause in production.