The value of Tesla shares has more than quintupled from a low in March, pushing the company’s market capitalization to now over $400 billion, which is greater than both Walmart Inc. and Johnson & Johnson.
By : Bloomberg
| Updated on: 27 Aug 2020, 10:02 AM 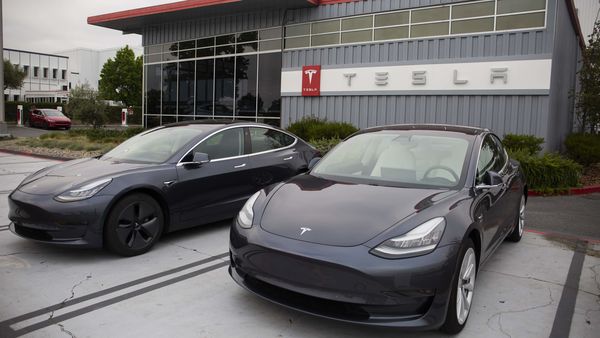 Wall Street’s less skeptical view on Tesla Inc. further solidified on Wednesday after a Jefferies analyst more than doubled his price target on the stock, saying the company will continue to broaden its competitive edge in multiple dimensions, including battery capacity and industrial efficiency.

The analyst, Philippe Houchois, raised his target from $1,200 to to $2,500, making it the highest on the Street, according to Bloomberg data. Shares of the electric-vehicle maker jumped as much as 6.6% to $2,1453.81 in New York, notching a new intraday record.

The value of Tesla shares has more than quintupled from a low in March, pushing the company’s market capitalization to now over $400 billion, which is greater than both Walmart Inc. and Johnson & Johnson. The reason behind the surge is less clear, though Wall Street analysts and experts have been becoming more bullish, pointing to rising expectations the stock will join the S&P 500 Index, the company’s upcoming “Battery Day" where new technology may be unveiled, and renewed market enthusiasm for electric cars.

The company’s Chief Executive Officer Elon Musk earlier this week said on Twitter that mass-producing batteries with a significantly higher energy density was within reach. Tesla will be holding its battery event on Sept. 22.

“Nothing matters more on ‘Battery Day’ than understanding how the ‘million-mile’ batteries could profoundly change the auto business model," Jefferies’ Houchois wrote in a note to clients. The analyst said that while the investment case around the company has often been about cars, Tesla’s edge in that space will start to shrink, and the company will challenge the auto industry in many other areas, including leveraging its brand value, reducing capital expenses, and improving productivity and software.

Even though the analyst said he can’t “pretend to understand the magnitude and speed of share price moves," Houchois believes the valuation problem lies with traditional automakers and not Tesla. “We expect the valuation gap with Tesla will remain wide or wider until carmakers have viable electric vehicle businesses and can start off-loading ‘stranded’ assets and corresponding liabilities."