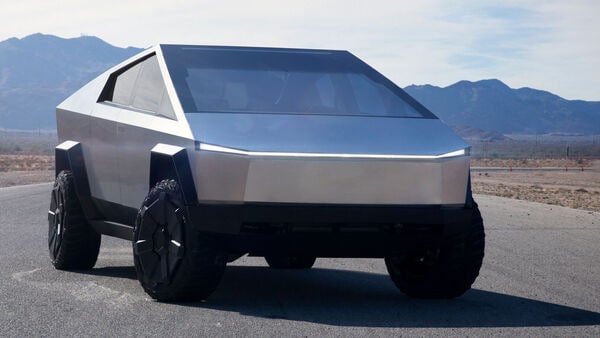 US EV giant Tesla aims to complete the development of its Cybertruck pickup this year so that the model can go into production in 2023. The comment on Cybertruck came from CEO Elon Musk during an event for the start of Model Y deliveries at Gigafactory Berlin, Electrek reported.

When Musk was asked by an employee about Tesla’s short-term goals, he said, “We want to complete the development of Cybertruck this year and be ready for production next year." He also added that Tesla’s focus this year will be to ramp up production of its current vehicle programs, especially Model Y and Model 3 electric cars.

When the Cybertruck was first unveiled in 2019, Tesla had said that the electric pickup truck would be introduced in the market by the end of 2021. However, when the deadline was approaching, the automaker confirmed that production slipped to 2022. But now, it's been shifted to “early next year", i.e. in 2023.

The Tesla CEO also said that the company is aiming to complete engineering on the new Roadster this year, and is hoping to get enough batteries to be able to produce more Tesla Semi trucks.

The comments from Musk came during an event in Berlin where Musk personally oversaw the handing over of Made-in-Germany Model Ys to customers as the company officially started deliveries at its Gruenheide plant. This marks the start of the automaker's inaugural European hub just two years after it was first announced.

The handing over ceremony took placed amid loud music while 30 clients and their families got a first glimpse of their shining new vehicles through a neon-lit Tesla branded tunnel. Musk addressed the fans, danced and joked with them too. "This is a great day for the factory," Musk said, describing it as "another step in the direction of a sustainable future".