Tata Tigor EV was assessed in its most basic safety specification, fitted with two airbags as standard.The electric vehicle's safety rating can be further improved by equipping it with Electronic Stability Control, side impact protection, three-point belts in all seating positions, among others.
By : HT Auto Desk
| Updated on: 31 Aug 2021, 01:36 PM 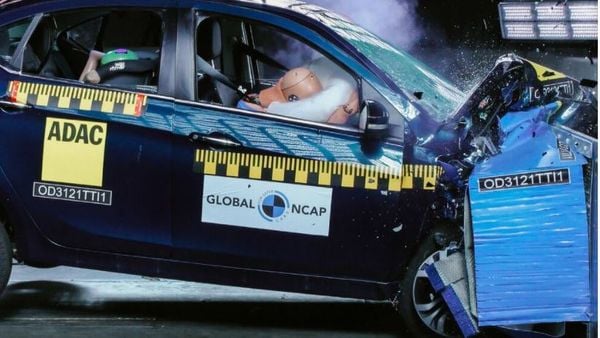 Tata Tigor EV, that became the first ever electric vehicle (EV) tested by the Global NCAP, has scored four stars in the latest crash tests for both adult and child occupants. The electric vehicle was assessed in its most basic safety specification, fitted with two airbags as standard, under its #SaferCarsForIndia campaign.

As per the safety rating agency, the electric vehicle's safety rating can be further improved by equipping it with additional safety features such as Electronic Stability Control (ESC), side impact protection, three-point belts in all seating positions and ISOFIX connectors.

While electric models can pose a technical challenge while adding more safety features due to the electric powertrain system, the Tigor EV exemplifies that safety improvements are possible with battery-powered models. “Tata has shown consistent safety improvements throughout its fleet range. It should be recognised and applauded for this commitment to improving their vehicles in response to Global NCAP’s call to democratise vehicle safety," said Alejandro Furas, Secretary General of Global NCAP.

The safety rating agency encouraged other vehicle manufacturers to follow Tata Motors' lead in enhancing the safety features of its models, even the battery-powered ones. “Safety and sustainability improvements are possible for all manufacturers operating in the Indian market," said David Ward, President of the Towards Zero Foundation.

Tata Motors recently launched the 2021 Tigor EV in the Indian car market at a starting price of ₹11.99 lakh, going up to ₹12.99 (ex showroom). Its bookings had been opened earlier this month for a token amount of ₹21,000. The electric vehicle has been made available in three trims and two colour options.

Tata Tigor EV is claimed to be capable of running 306 kms (ARAI certified and under standard conditions) on a single charge. Its IP67 rated 26 kWh lithium-ion battery pack can be charged using a fast charger or even a 15A home socket. The vehicle's electric powertrain generates 73.75 hp of power and 170 Nm of torque.