Nissan's sales and profits had been slumping and it was burning through cash even before the coronavirus crisis.The pandemic has only piled on urgency and pressure to renewed efforts to downsize.
By : Reuters
| Updated on: 10 Apr 2020, 04:48 PM 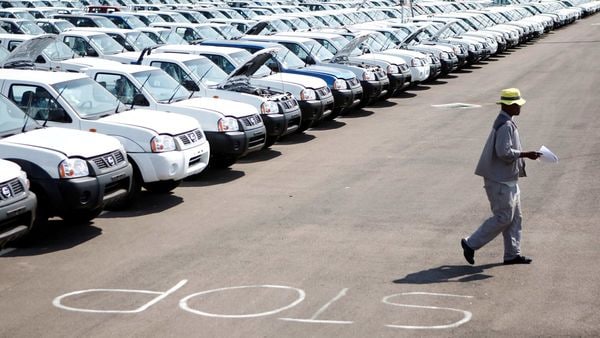 A worker walks near a row of cars at Nissan's manufacturing plant in Rosslyn, outside Pretoria. (File photo)

Nissan Motor Co Ltd's management has become convinced the struggling automaker needs to be much smaller and a restructuring plan due out next month would likely assume a cut of 1 million cars to its annual sales target, senior company sources said.

Even before the spread of the coronavirus, Nissan's sales and profits had been slumping and it was burning through cash, forcing it to row back on an aggressive expansion plan pursued by ousted leader Carlos Ghosn. The pandemic has only piled on urgency and pressure to renewed efforts to downsize.

No new sales target has been finalised and it remains unclear whether one will be formally disclosed.

But Nissan's plans for restructuring through to March 2023 should be based on the assumption that it would only be able to return to annual sales of 5 million cars by then, two sources said, adding this would entail a large reduction to manufacturing capacity.

That compares with a goal of 6 million cars for the same period outlined in July by then-CEO Hiroto Saikawa, who had already stepped back from around 8 million targeted under Ghosn. Nissan likely sold about 5 million cars in the past financial year but this year's outlook is bleaker due to the pandemic.

"For years, Nissan was looking for annual sales volumes around 7-8 million vehicles. The company has never managed to sell much more than 5 million or so," one of the sources told Reuters.

"The company can no longer consider this sort of wishful thinking. The resizing issue is really being taken into account, it has a lot of consequences on operations for 2020-2022."

A third senior company source said the figure could be even lower than 5 million given the impact of the virus, which has hammered car demand around the world.

The sources declined to be identified as details of the turnaround plan have yet to finalised.

In July, Nissan said it was aiming to cut annual global production capacity to around 6.5 million vehicles. Shrinking its sales target by 1 million vehicles would equate to closing three to four more assembly plants and shedding thousands more jobs on top of already announced plans to cut its workforce by 10%. The cutbacks would also ripple through to its suppliers and dealers.

Nissan declined to comment on its progress in devising a new mid-term plan. "The details will be shared in May," a spokeswoman said.

The people said that a key metric of the recovery plan will be its operating profit margin and new CEO Makoto Uchida is likely to keep Saikawa's target for a margin of about 6%, one of the people said. In the third quarter, the margin was just 0.9%.

"At the very least, a downsizing is a given," the person said.

By comparison, operating margins at top-selling automakers Toyota Motor Corp and Volkswagen AG before the coronavirus pandemic hovered around 8%.

Another top priority will be the preservation of cash.

As of December, Nissan's automotive operations had negative free cash flow of 670.9 billion yen, a more than 6-fold increase from a year ago. "That's no longer at an acceptable level," said one of the people.

Nissan has requested a $4.6 billion commitment line from major lenders to cushion the impact of the pandemic while it seeks to engineer the desperately needed turnaround, people with knowledge of the matter have said.