Local cops say the driver may have pressed the accelerator when he went to brake. The result? A wet and not so wild Lamborghini.
By : HT Auto Desk
| Updated on: 21 Oct 2021, 10:26 AM 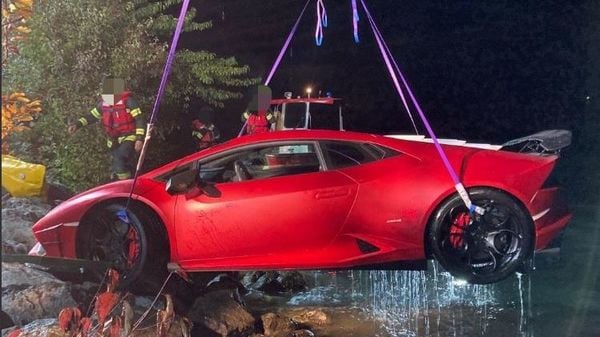 An expensive catch! (This photo was posted on Twitter by @LPDooe)

A Lamborghini  can do many things - race against the wind, stun crowds into silence or even roar to gain instant admiration. But one thing no Lamborghini can still do is take a dip in water and come out sailing. It is something one owner of the supercar is likely to remember all life long.

In an incident reported in Australia, a Lamborghini driver reportedly pressed the accelerator instead of the brake pedal while reversing the mean machine. Unable to control the supercar, police say he hurled it 15 metres into the Mondsee lake. Fortunately, there had also been a passenger but he had exited the vehicle before the driver had engaged the reverse gear.

Also fortunate is that once the supercar began sinking in the lake, the driver did manage to get out and swim his way to the shore. Local media reports that he was given first aid by emergency personnel who had been alerted by the passenger. He was eventually taken to the hospital for further treatment.

The Lamborghini, however, may not be as lucky. Reports suggest it took a team of five divers, a recovery balloon and a crane from a tow truck to fish out the vehicle which had sunk to around 5 metres' depth. The entire operation took three hours.

It is unlikely that this particular Lamborghini model will ever race again as the possible repair cost, if possible at all, may well go beyond the purchase price of a new unit.