An ode to Lamborghini cars, Tecnomar for Lamborghini 63 is a superyacht that seeks to replicate the same performance and style - coupled with opulence - on open seas.
By : HT Auto Desk
| Updated on: 30 Jun 2020, 06:24 PM 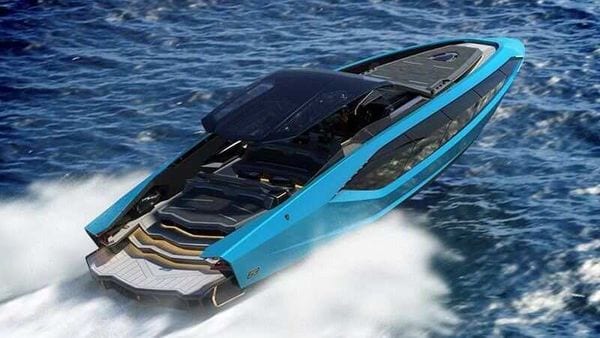 Tecnomar for Lamborghini 63 seeks to be a superyacth on the high seas.

Automobili Lamborghini on Tuesday unveiled ‘Tecnomar for Lamborghini 63’ - a yacht which pays tribute to the iconic Italian supercars while literally creating waves of its own in open seas. Co-developed with The Italian Sea Group, the yacht seeks to be a symbol of synthesis between the two brands.

Lamborghini and The Italian Sea Group worked closely together to develop the yacht which draws inspiration from Lamborghini Sián FKP 37, a hybrid super sports car which has a futuristic design philosophy. The same futuristic design philosophy has been carried forward in the yacht which promises to take the performance, driving pleasure and attention to details from the open roads to the open seas. The striking feature of Tecnomar for Lamborghini 63, therefore, are its speed and the dynamism of lightweight engineering. 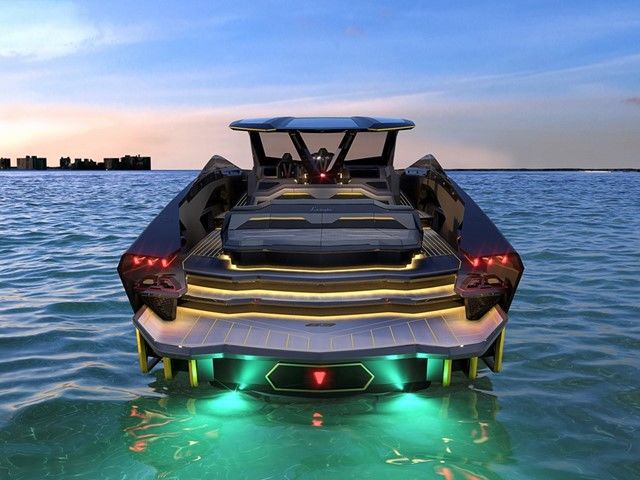 While not beating past waves, the Tecnomar for Lamborghini 63 is contend with its luxurious visual appeal.

Powered by two MAN V12-2000 hp engines, the yacht is capable of hitting speeds of 60 knots. The carbon fibre material, typical of Lamborghini super sports cars, puts this motor yacht firmly in the ultra-lightweight boat classification, with its 63 feet length weighing in at 24 tons.

The exterior design is characterized by a super sportive silhouette, with a cutting-edge but thoroughly nautical appearance. The hull and the superstructure are created from a high-performance shell, developed by naval engineers specializing in hydrodynamic sciences. Interestingly, design cues from the Miura and the Countach of the 1960s and 1970s were considered and given a more contemporary re-touch. The bow lights are an homage to the Lamborghini concept car Terzo Millennio and to the Sián FKP 37, both distinctive for their Y-shaped front lights.

Speed and stellar looks though are not the only highlights. Step inside and it is another world in sea-borne luxury. Lamborghini’s iconic clean lines, hexagon shapes, Y-motif and materials are clearly incorporated into the design, together with the fully customizable colours and materials in the manner of Lamborghini’s Ad Personam programme.

The motor yacht’s instrument panel interprets the car cockpit in a nautical style, completely integrating all navigation and control systems. As in Lamborghini super sports cars, details are finished in carbon fibre, with Lamborghini’s Carbon Skin used in the sports seats and on the helm. 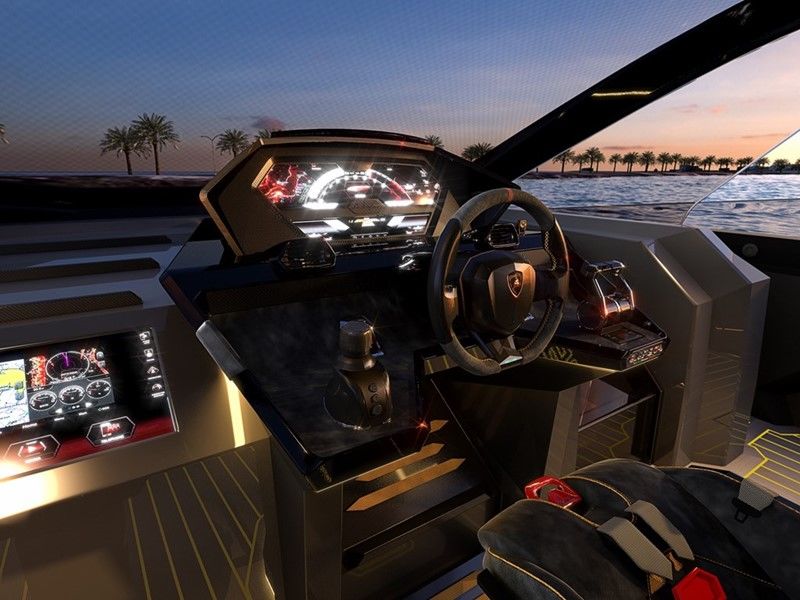 The steering wheel of the Tecnomar for Lamborghini 63 is much like the wheels that make Lamborghini cars race ahead.

Clearly then, the Tecnomar for Lamborghini 63 builds on the rich heritage of Lamborghini cars in time immemorial and brings it to the world of motor yacht with added dollops of opulence. "If I had to imagine a Lamborghini on water, this would be my vision. I’m delighted to celebrate this successful collaboration," said Stefano Domenicali, Chairman and CEO of Automobili Lamborghini. "This yacht represents the significance of creating a valuable partnership, at its best: our co-operation allows the essence of both organisations’ style and expertise to be transferred to different worlds, sharing in their diversity to interpret and add value to the final product in a new environment."

The first boat will be available at the beginning of 2021.