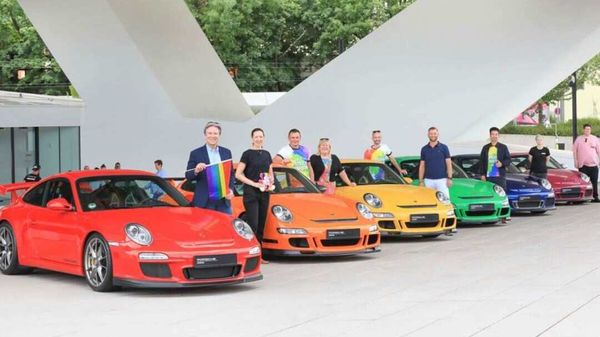 “For a stronger diversity" – this was the motto of countless campaigns surrounding last weekend’s gay pride cultural festival, known in Germany as Christopher Street Day. Every year on this day at the end of July, millions of people around the globe take a stance against discrimination to campaign for the rights of gays, lesbians, bisexuals and transgender people. Porsche also stands up for an open-minded co-existence and bringing diversity to life.

“We demand and foster equal opportunities and want to make it possible for all Porsche staff to contribute just as they are, regardless of elements including their gender, ethnic background, religion, disability, age or sexual orientation," explains Andreas Haffner, Member of the Executive Board for Human Resources. Last weekend, Porsche took a visible stance for acceptance and inclusion of the LGBT+ community with a host of events.

A rainbow flag was flying on the plant’s flagpole at the weekend as a symbol of diversity and tolerance. Passers-by on the Porscheplatz were also able to marvel at a mobile rainbow, made up of six colourful 911 models that had been parked on the square outside the Porsche Museum. Numerous Porsche staff members took a stance of a sporting nature at the virtual Pride Run, running many kilometres in brightly coloured shirts on their own individual routes to demonstrate their solidarity with the rainbow community.

Earlier, luxury carmaker Bentley Motors tied up with Cheshire East Council for the North West of England’s first virtual Pride event which took place on July 25. Bentley had announced three key themes: pride in the diversity of its colleagues at the home of Bentley in Crewe and around the world, hope and gratitude as the business begins to emerge from the Covid-19 crisis and ongoing support for the local community.

To celebrate, a Bentley Continental GT V8 Convertible was wrapped in a rainbow design showcasing six of Bentley’s bespoke paint colours. The car featured during the online Pride event. Bentley’s in-house designers and colour and trim team turned a concept created from a competition among employees into reality on a Continental GT Convertible. This V8 mode featuring 20-inch 10-spoke painted alloy wheels, subtle V8 badging and a sublime, handcrafted interior, took pride of place in the CW1 showroom in Crewe.