Sales of EVs sparkle in third quarter for BMW

BMW states that in its third quarter, sales of all-electric and plug-in hybrid vehicles increased by 43.1 per cent year-on-year to reach 78,333 units.BMW Mini also registered a boost in the demand for its all-electric Mini SE model.
By : HT Auto Desk
| Updated on: 08 Oct 2021, 12:10 PM 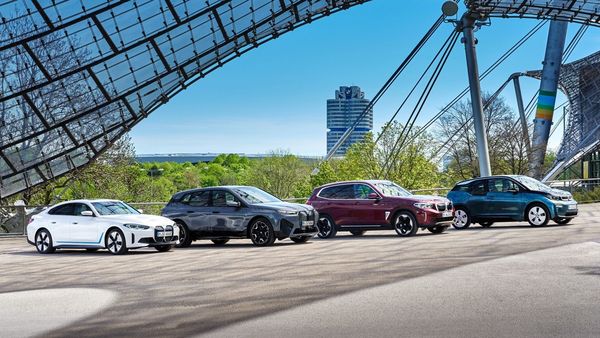 BMW stated that a total of 59,688 all-electric vehicles have been delivered to customers.

BMW released its sales report for September and the company's electric vehicles dominated the numbers. The luxury automaker sold 2,31,576 electric vehicles globally starting January till September this year. BMW informed that in the third quarter, sales of all-electric and plug-in hybrid vehicles increased by 43.1 per cent year-on-year to reach 78,333 units. It also mentioned that a total of 59,688 all-electric vehicles have been delivered to customers which shows a 121.4 per cent rise in sales since the beginning of 2021.

BMW informed that the fully-electric BMW iX3 that has been available in Europe since the start of the year sold about 20,887 units to date. It gave overall sales a major boost, stated the Bavarian automaker. The company is confident that its sales will get a significant push with its upcoming launches of electric vehicles, BMW iX and BMW i4. These EVs will be launched in November. “New orders worldwide already reflect our customers’ enthusiasm for these new models," said Pieter Nota, member of the board of management of BMW AG responsible for Customer, Brands and Sales.

Nota also added that these numbers highlighted the company's move towards sustainable mobility is a hit with the customers. “We are confident we can meet our ambitious sales targets and achieve solid, profitable growth for 2021," he further said. BMW's subsidiary Mini also registered an increase in the demand for its all-electric Mini SE model which stands at about 106.6 per cent. The brand sold 20,104 units of the EV. The company informed that overall 15.2 per cent of MINI vehicles released onto the roads in the year to the end of September had an electrified drive train.

BMW, though with its favourable sales number, has also highlighted the semiconductor shortage issue that has gripped the automotive industry. The company in the first nine months made individual adjustments to its production programme in response to the limited availability of semiconductor components. It feels the situation still remains dire and the possibility of sales being affected in the coming months cannot be ruled out.