Royal Enfield will retail the majority of its motorcycle range from the new dealership located on Ubi Road in Singapore.
By : HT Auto Desk
| Written By : Prashant Singh
| Updated on: 12 May 2021, 20:56 PM 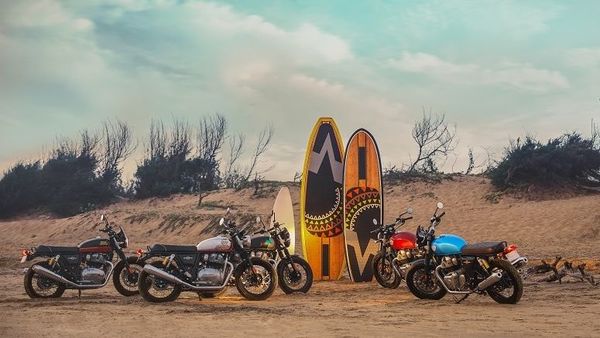 Royal Enfield has expanded its international footprint with a new dealership in Singapore. The company has come up with a new flagship store located in Ubi Road, Singapore.

Royal Enfield will be retailing its Interceptor 650, Himalayan, Classic 500, Bullet 500, and Continental GT 650 through the new flagship showroom in Singapore. Sadly, Meteor 350 won't be part of the list. Apart from motorcycles, the dealership will also host a range of RE apparel, riding gear, and genuine accessories for RE's models.

The Chennai-based retro-classic bike maker has been on an aggressive front when it comes to expanding its footprint in the international markets. Royal Enfield now does business in a range of countries including the USA, UK, Japan, Indonesia, and the Philippines. It also operates 36 showrooms in Thailand which is a huge market for the company. In addition, it also plans to open a new factory which would be its second overseas plant after Argentina. RE's Thai facility will serve as a hub for exports to other countries in Asia.

In the last few years, the company's reach in several ASEAN (Association of Southeast Asian Nations) countries such as Vietnam, the Philippines, Malaysia, and Indonesia, has soared. While India continues to be the leading market for obvious reasons, the company is also aiming to continuously expand its reach in the markets outside India.

(Also Read: Royal Enfield Shotgun name registered. Here's what it could be)

Meanwhile, it is gearing up for the launch of a number of new products in India. The list includes new-gen Classic 350, Hunter 350, among several other products.