Children were asked to send in their designs and Rolls-Royce took many of them and gave them actual design renderings.
By : HT Auto Desk
| Updated on: 02 Jul 2020, 10:20 AM 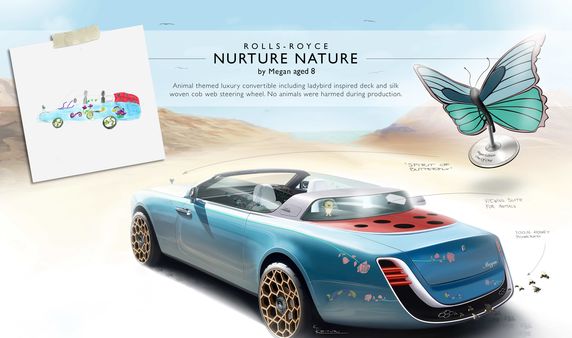 Rolls-Royce Motor Cars had been inviting entries from its young fans from across the world as part of its Young Designer Competition and recently put out designs it had shortlisted from children under the age of 16. While these entries were all examples of what an imagination in full flight is capable of, one such entry showed a Rolls-Royce convertible with honey as fuel.

The rendering done by Rolls-Royce of a convertible drawn by an eight-year-old called Megan features a ladybird-inspired deck and silk woven cob web steering. With flowers adorning the rear body, the car was also given a viewing suite for animals on board. A butterfly motif was added on the front bonnet as per the original design sent by Megan. Interestingly, the design highlighted that it would run on honey power and instead of fumes, the rendering appeared to show bees streaming out of the exhaust.

Rolls-Royce says it has received an overwhelming response to the competition which seeks to give flight to stimulate design talent among children. First launched in April, the objective was to help children stranded at home due to lockdowns to have something to occupy themselves with. By the time the competition was brought to an end - on June 2, more than 5,000 illustrations had been received from over 80 countries. "We wanted to give children the chance to let their imagination flow freely – it’s clearly struck a chord. They’ve responded magnificently – and given us an extremely difficult task in selecting our shortlist and winner," said Gavin Hartley, Head of Bespoke Design, Rolls-Royce Motor Cars.

Now designers at Rolls-Royce have been going through these entries and picking up a few to give these a more realistic design rendering while keeping the innocence intact.