It took fire-fighting officials several hours to bring the fire under control and to cool down the Tesla Model S Plaid EV.
By : HT Auto Desk
| Updated on: 01 Jul 2021, 03:38 PM 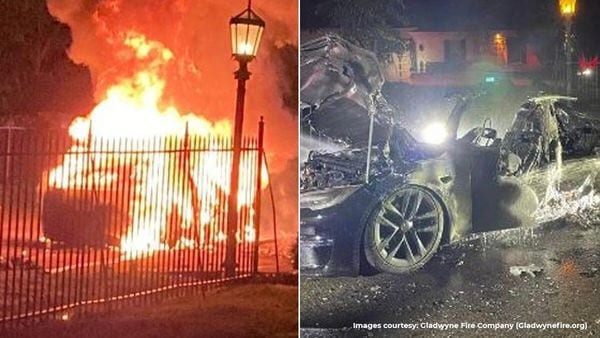 A Tesla Model S Plaid caught fire in a suburb of Philadelphia and several fire rescue teams were involved in bringing the blaze under control.

Tesla Model S Plaid is one of the fastest production vehicles in the world and was recently launched by Tesla to take on some very capable rivals from the luxury and super luxury segments. But while the Model S Plaid is seriously fast - hits 100 kmph in under two seconds, a recent incidents of a new unit catching fire has become a raging topic of debate online.

In an incident reported by Gladwyne fire department, a new Tesla Model S Plaid caught fire and it took several hours for the blaze to be extinguished and for the charred remains to cool down. But once the flames were brought under control, what remained of the around $122,000 (base price) electric vehicle was a heap of metal scrap.

It is because Tesla Model S Plaid only began to be delivered last month, it is amply clear that this EV was absolutely new. While the cause of the fire isn't known, local reports quoted an eyewitness as saying that the EV was seen rolling down a road before exploding. What is even stranger is that officials are still trying to find out who the owner of this particular Tesla Model S Plaid is.

Thankfully, there are no reports of any physical injuries or deaths in the incident.

As for the EV itself, it can be safely assumed that it is beyond the scope of any repair work and - unfortunate as it may be - will be relegated to the scrapyard.