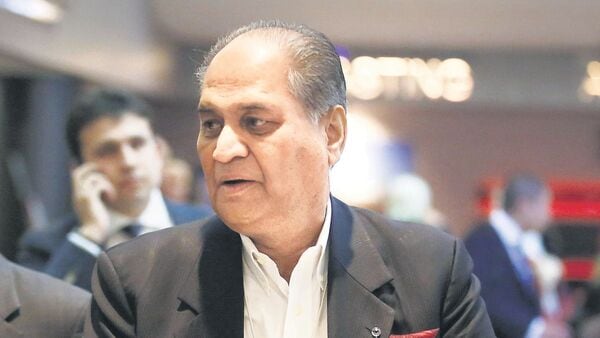 Former Chairperson of the Bajaj Group Rahul Bajaj passed away in Ruby Hospital, Pune on Saturday, informed a company official. He was 83 years old. The official added Bajaj was not keeping well for some time. He is survived by two sons Rajiv Bajaj and Sanjiv Bajaj, and a daughter Sunaina Kejriwal.

Minister of Road Transport and Highways Nitin Gadkari took to Twitter to share the news and his condolence message. He tweeted Bajaj was an instrumental figure in the industry as he led the company for five decades. Madhya Pradesh Chief Minister Shivraj Singh Chouhan also condoled the demise of Bajaj. “The demise of Rahul Bajaj the Chairman emeritus of the Bajaj Group is a loss to India's business community. My condolences to the bereaved family and the group," tweeted Chouhan.

As per an ANI report, former union minister Praful Patel said Rahul Bajaj is credited with making the brand Bajaj a household name. “Saddened by the passing away of renowned industrialist and one of the longest-serving chairman in corporate India, Padma Bhushan Rahul Bajaj ji. He is credited with making the brand Bajaj a household name. My heartfelt condolences to his family members," Patel tweeted. Nationalist Congress Party (NCP) President Sharad Pawar too took to the microblogging site and shared Bajaj brought transformation in society especially in poor and middle-class people with his two-wheel technology. “The affordable vehicle increased mobility, eased struggle for getting means of livelihood and became the tool of socio-economic change! We Indian are deeply indebted for his immense contribution to the industry," Pawar said in another tweet.

Bajaj resigned from his position of chairmanship last year and was replaced by Neeraj Bajaj, who was a non-executive director back then. The company had stated Bajaj decided to give up the post citing age.

Bajaj was born on June 10, 1938, and headed the Bajaj Group of companies. He had a bachelors degree in Economics along with a law degree from Mumbai University as well as an MBA from prestigious Harvard University. He was also a former member of the Rajya Sabha. Bajaj had been in the role of chairman of the International Business Council, World Economic Forum.