An all-electric Taycan Turbo S with an all-wheel drive system was used to break the world record by racing driver Leh Keen.The sports car was driven at a speed of 165.1 km/h inside an exhibition hall, beating the previous record of 138.4 km/h.
By : HT Auto Desk
| Updated on: 17 Feb 2021, 08:47 PM 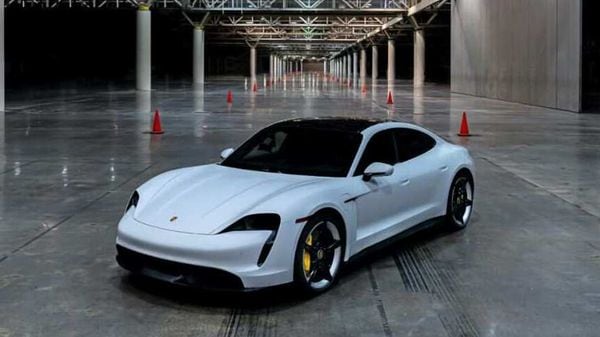 Porsche Taycan in an enclosed building

Porsche Taycan has claimed the Guinness World Records title for the fastest speed driven by a vehicle in an enclosed building. The sports car was driven at a speed of 165.1 km/h inside an exhibition hall in New Orleans, Louisiana by racing driver Leh Keen.

The previous seven-year-long record for the fastest driven vehicle in a closed building stood at 138.4 km/h. Keen attempted and finish this record within strict guidelines such as no run up, no safety net, no doors open and thus, no escape route. An all-electric Taycan Turbo S qualified to meet Keen's requirements to attempt a world record. The Turbo S had all-wheel drive system to maximise grip, powerful carbon ceramic brakes and the ability to sprint from 100 km/h in just 2.8 seconds. A vehicle that is among the hardest to accelerate and also hardest to decelerate. The Ernest N Morial Convention Centre in New Orleans, which served as the venue for the record, boasts the largest contiguous exhibit hall in the US at just over one million square feet space. The building's polished concrete surface replicated ice when being driven over at speed. "The surface is so unpredictable, so slick, that you have to have complete trust in your car... even in a massive space like the one we had, it seems very small," said Keen.

(Also read | Porsche snubs 'Made in China' for now, backs value, image of 'Made in Germany')

The stock road tyres of the Taycan Turbo S were preheated as a precaution before attempting the record. Speaking about his strategy for the record breaking attempt, Keen said that he built up slowly, with low speed exploratory runs. "I used the car’s launch control and the Taycan just hooked up... I was gentle on the brakes in the end – the Taycan’s brakes were more than up to the job," Keen added. "It came as a surprise and a relief that I’d beaten the record."