Porsche is the official automotive partner for the Dale Chihuly: Glass exhibition at the Gardens by the Bay, Singapore.Porsche will also introduce a test-drive experience for invited guests only over the next two weeks.
By : HT Auto Desk
| Updated on: 13 Jul 2021, 04:52 PM 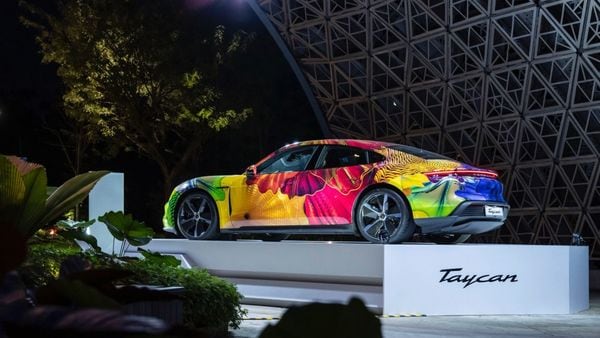 Porsche Taycan at the exhibiton

Porsche has become the official automotive partner for the exhibition called 'Dale Chihuly: Glass in Bloom' conducted at the Gardens by the Bay in Singapore. The centre stage in the exhibition has been taken by a Porsche Taycan art car that has been wrapped in colourful livery, featuring the Persian series of American glass artist Dale Chihuly.

The Taycan in its multicoloured avatar against the backdrop called SG50 Lattice has grabbed the attention of the audience at the exhibition. The automaker says that the Porsche Taycan's presence amidst the Bay's lush South Garden presents a striking display of history and innovation. Porsche will also introduce a test-drive experience for invited guests only over the next two weeks starting from 12th July. The guests will get a chance to drive the EV around the location. Taycan is the first all-electric car from Porsche (Porsche)

Vice president region overseas and emerging markets at Porsche Matthias Becker notes that the Taycan has been well-received by the Southeast Asian customers as well as customers from Singapore. “We see the ASEAN markets as an important growth region for Porsche and we want to use partnerships like these to position our brand and products in a particularly emotional environment," he adds.

Porsche Asia Pacific also shared a record performance in the first half this year, with an 87 per cent sales increase compared to last year. About 47 per cent of all sports cars that were delivered were either fully electric or plug-in hybrid vehicles. Porsche also mentions that 70 per cent of customers who took ownership of the all-electric Taycan were completely new to the brand.

Porsche, in an attempt to boost its electric mobility in Southeast Asia, has recently announced the implementation of Southeast Asia’s first cross-boundary high-performance charging (HPC) network in partnership with Shell. It will offer the highest charging capacity across Singapore and Malaysia with 180 kW direct-current (DC) chargers. The company has also planned to expand to other locations as part of its growing Porsche Destination Charging network.