Since Porsche's first investment, Rimac's workforce has nearly doubled to 1,000 employees. It is collaborating with carmakers including Hyundai, Kia and Aston Martin.
By : Bloomberg
| Updated on: 08 Mar 2021, 13:52 PM 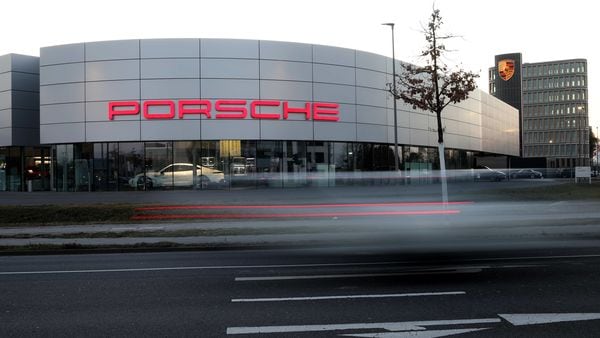 Traffic passes a Porsche SE luxury automobile showroom in Berlin, Germany, on Monday, Feb. 22, 2021. Volkswagen AG is considering a�separate Porsche listing�in a deal that could boost its valuation and bring in a significant amount of cash, people familiar with the matter have said. Photographer: Liesa Johannssen-Koppitz/Bloomberg

Porsche AG agreed to lifts its stake in Rimac Automobili, a move that could pave the way for parent Volkswagen AG to sell its ultra-luxury Bugatti brand to the Croatian electric supercar maker.

Porsche will invest 70 million euros ($84 million) to raise its stake in Rimac to 24%, from 15%, in a capital increase, the German manufacturer said in a statement Monday.

“Our investments in the company Rimac has proved to be absolutely right," Porsche Chief Financial Officer Lutz Meschke said. “The company has developed very well technologically. We expand our cooperation step by step."

Bugatti, which builds high-priced models including the $5.8 million Divo, sold only about 80 vehicles last year. Its 1,500-horsepower cars are increasingly out of line with VW’s electrification drive costing the group billions.

Rimac, known for electric hypercars that boast as much as 2,000 horsepower, has been gradually expanding engineering operations and supplies high-tech parts for electric vehicles to automakers. The company headquartered near Zagreb was founded in 2009 and now employs almost 1,000 people.

“Because we have many automakers worldwide as customers it’s important for Rimac as well as for Porsche that we remain a wholly independent company," founder Mate Rimac said in the statement. “The partnership with Porsche helps the company to develop and grow, which is an advantage for all our customers."