Over 3,400 fines issued in Delhi in November for PUC certificate violations

Delhi Transport department issued more than 3.34 lakh PUC certificates to motorists from November 1-17.More than 50 teams have been deployed by the department at vantage points such as fuel stations and identified crossings to check vehicles' PUC certificates.
By : HT Auto Desk
| Updated on: 21 Nov 2021, 09:58 AM 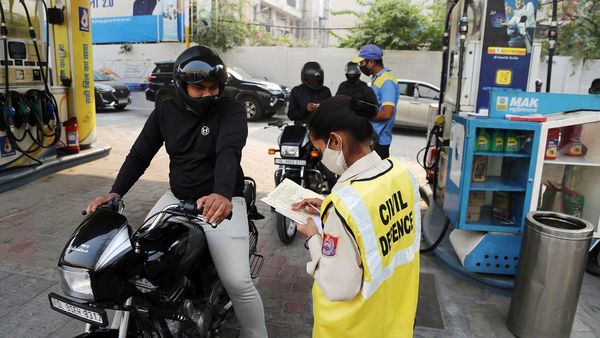 Civil Defence personnel checks the Pollution Certificate of a vehicle before refueling petrol amid rising air pollution in the city at the petrol station, in New Delhi.

The Delhi Transport department has issued 3,446 challans worth over ₹3.5 crore to motorists in the national capital from November 1 to 17 for violating the norms of Pollution Under Control (PUC) certificate. The department has intensified its enforcement drive to penalise vehicle owners without a valid PUC certificate amid rising air pollution in the city.

The department also issued more than 3.34 lakh PUC certificates to motorists during this period in November.

Last month, the enforcement wing teams of the transport department checked 8,25,681 vehicles and issued 9,522 challans worth more than ₹9.5 crore. Over eight lakh PUC certificates were issued in the month, as per official data. Nearly 17.71 lakh vehicles were running without valid PUC in the city by mid October out of total 1.34 crore vehicles registered in Delhi.

Most of the vehicles without PUC certificate included two-wheelers, nearly 13 lakh while 4.20 lakh four-wheelers were found without the valid certificate, according to the Transport department database.

In order to intensify its enforcement drive, the transport department has deployed more than 50 teams at vantage points such as fuel stations and identified crossings. They are also working towards spreading awareness about the importance of getting vehicles' pollution checked. The drive was started last month as Delhi's air quality has been getting affected with various local and external factors.

The city has nearly 1,000 authorised PUC centres that issued 5.44 lakh certificates in September. This number has significantly increased with the Transport department starting its enforcement drive against pollution causing vehicles. While the daily average of PUC certificate being issued was around 20,000 in mid September, the number rose to around 38,000 per day during the second week of October. It is currently over 30,000 per day.

The city's Transport department has also been taking action against old petrol and diesel vehicles that have completed their stipulated working age. Around 50 such vehicles have been impounded so far in November.