While traffic jams across the city of Wuhan, believed to be the epicenter of Covid-19 that continues to plague almost every country across the world, are not anywhere near the 2019 average when life was normal, it still got significantly bad significantly fast.
By : Shubhodeep Chakravarty
| Updated on: 08 Apr 2020, 06:09 PM 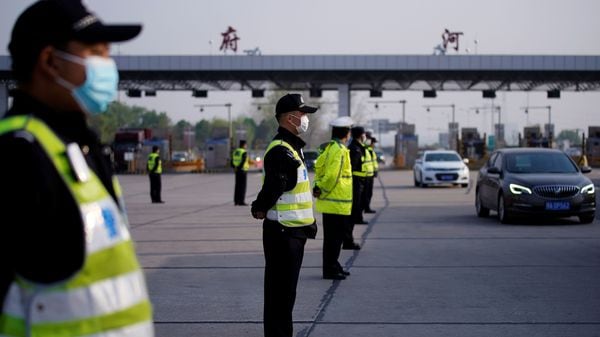 Police officers stand guard at a toll station of an expressway after travel restrictions to leave Wuhan, the capital of Hubei province and China's epicentre of the novel coronavirus disease (COVID-19) outbreak, were lifted.

Silent streets and parked cars for nearly three months recently gave way to the return of unfortunate scenes of traffic snarls as residents of Wuhan reportedly came out in huge numbers after being in lock down state for 76 days.

While traffic jams across the city of Wuhan, believed to be the epicenter of Covid-19 that continues to plague almost every country across the world, are not anywhere near the 2019 average when life was normal, it still got significantly bad significantly bad. According to TomTom, a popular navigation software, the city had 80 spots where traffic was moving slow at 6pm (China time) on Wednesday. The cumulative length of these traffic snarls was calculated to be over 50 kilometers. The report also informed that this was 21% down from the yearly average in 2019 but, quite obviously, far higher than was the first three months of 2020 had witnessed.

Car sales fell drastically in several Chinese provinces, including in Hubei province where Wuhan is located. Even the sizable vehicular population that existed was confined to their stationery state as the city was put under a strict lock down to contain the spread of Covid-19.

According to reports, the moment the lock down was lifted, thousands of people rushed out to get in their respective cars, many to make way through the several motorways leading out of Wuhan. This resulted in sizable traffic jams, especially on key roads within the city and on prominent motorways as well as roads leading to airports and bus stations.

There are an estimated 56 million people in Wuhan and neighbouring cities in the Hubei provice which were all under a complete lock down. "It’s like being liberated," a local resident was quoted as saying by UK's Guardian. He was reportedly in a car stuck in traffic on a motorway leading east out of Wuhan.

With signs that the worse may be over and with China reporting no fresh deaths due to Covid-19 on Tuesday, there is a sense of jubilation even in the traffic snarls on Wuhan streets.