Honda's Wuhan facility, a joint venture with Dongfeng Motor Group, was shut in late January when authorities ordered a lockdown in the city in a bid to snuff out the coronavirus.
By : Reuters
| Updated on: 08 Apr 2020, 03:11 PM 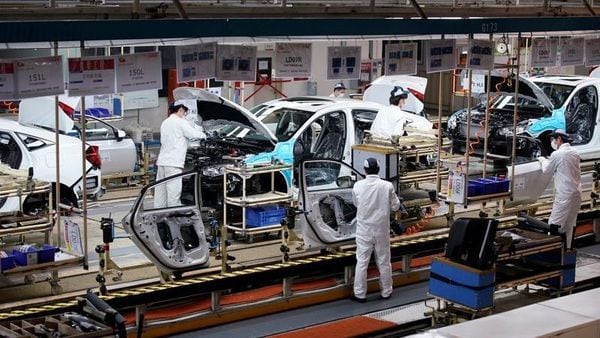 File photo: Employees work on a production line inside a Dongfeng Honda factory after lockdown measures in Wuhan, the capital of Hubei province and China's epicentre of the novel coronavirus disease outbreak, were further eased.

Temperature checkpoints and posters telling workers to keep more than a metre apart at Japanese automaker Honda Motor Co's reopened plant in the Chinese city of Wuhan show how the coronavirus has created a new normal on the factory floor.

The plant, a Honda joint venture with Dongfeng Motor Group was shut in late January when authorities ordered a lockdown in Wuhan in a bid to snuff out the coronavirus, which emerged there late last year.

It reopened on March 11 to resume operations in stages and is now back to pre-virus production levels, Li Shiquan, assistant director of the joint venture's No. 2 final assembly plant, told reporters on Wednesday.

Returning workers were asked to report where they had been since the epidemic started and temperature checkpoints were set up, Li said.

About 98% of its 12,000 workers were now back and were putting in over-time to make up for lost production, he said.

"We have many customers who are waiting for cars so this week we have arranged for each worker to work 1.5 hours more," he said, adding that a typical shift was eight hours.

A sign hanging from the ceiling in the factory said the goal was 1,237 cars that day, 17% higher than the 1,060 it usually produced.

The central industrial hub of Wuhan started allowing people to leave the city on Wednesday in what is seen as a turning point for China's fight against the coronavirus.

China's factories begun to reopen weeks ago as infection rates in their localities began to drop off.

Now other countries such as Italy and United States are trying to curb the spread of the virus by asking workplaces to shut and the public to stay home.

Honda has suspended operations in the United States and Canada, its biggest manufacturing hub, until May 1. It has also stopped output at plants in countries ranging from Britain to Thailand, and has announced intermittent stoppages at some of its Japanese plants.

The Wuhan plant reopened after the government approved its plan to curb infection risks, Li said. The plant's smoking and rest areas have been shut to stop people from gathering while meetings have to be held on video links.

Workers needing a rest from the assembly line are encouraged to sit on red stools spaced out on the factory floor, Li said.

Reuters reporters on a visit to the factory saw workers dressed in white overalls, rubber gloves and masks. Posters told them to keep a metre apart at all times, though that was not always adhered to.

Pasted on pillars were QR codes, which workers use their mobile phones to scan in order to fill in - once a day - forms asking about any coughing or contacts with unwell people.

Li said no coronavirus cases had been found since the plant resumed operations.

The plant's more than 500 suppliers in Wuhan had also been allowed to resume operations on March 11, Li said, adding that Dongfeng Honda had provided them with some help but he did not go into details.