Spread over 640 acres, the Renault Nissan Automotive India plant near Chennai is abuzz with activity.Apart from Magnite, there are nine other cars from three brands that find a home here.
By : Shubhodeep Chakravarty
| Updated on: 23 Mar 2021, 10:51 AM 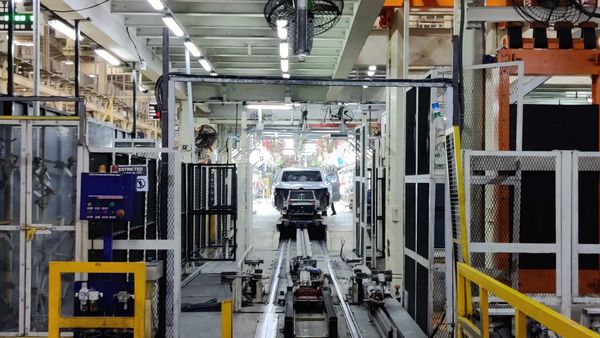 The RNAIPL not only caters to the Indian market but cars and parts are exported from here to several foreign markets as well.

These are hectic times at the Renault Nissan Automotive India Private Ltd (RNAIPL) plant near Chennai. Spread over 640 acres, this facility in Oragadam - some 20 kilometres from the capital city of Tamil Nadu - is the first joint Renault-Nissan Alliance plant for global markets. Established in 2010, it has produced 2.1 million vehicles so far and has a production capacity of 400,000 units. It is perhaps just the facility that a car like Magnite needed as it sees its success jump from one high to another ever since the sub-compact SUV was launched in December of 2020.

In a sense, Magnite has been a do-or-die product for Nissan in India and in its short journey since launch, it has been about the former. Demand for what was the most-affordable sub-compact SUV at the time of its launch has been strong and remains steady till date. Waiting times have spanned several months for some of the variants and Nissan has had to add a third production shift to ensure waiting times are brought down. If the buzz in showrooms is one indication of how a particular car is faring, the other strong indication comes from how busy it is at the manufacturing facility.

A Magnite makes its way around the RNAIPL facility.

From the stamping shop and body shop to the assembly line and beyond, the facility is a hotbed of activity, all with the singular aim of delivering each Magnite to its owner in a timely manner and to the highest degree of quality.

Nissan shares space at the facility with Renault and the line-after-line of competing cousins - Magnite as well as the Kiger - are testament to how much the Indian automotive industry is favouring sub-compact SUVs. To cater to this apparent favoritism, the RNAIPL is well-equipped to deliver.

Established at an investment of ₹61 billion, the facility employs around 7,800 people with an average age of 30 years. Currently, there are 10 cars under production from three brands. Nissan has its Sunny, Kicks and Magnite while Go, Go+ and Redi Go are produced under Datsun. Renault Duster, Kwid, Triber and Kiger also call it home. Additionally, there are five engines produced as well.

Kiger from Renault (L) and Nissan Magnite stand next to each other at RNAIPL facility.

Exports have, quite obviously, also increased in the past decade. Presently, the facility exports cars to 69 countries across the world while 3,912 parts are dispatched to 29 countries. In fact, the facility hit one million in car exports some time back and despite challenges posed by the Covid-19 pandemic.

But while brand new and gleaming Magnite cars join others at the mammoth parking lots here, all set for dispatch, there is also a stated focus on the plant becoming more sustainable. 29% of power is sourced from wind farms while 2 MW solar farm is within the premises itself. It is expected that 68% green energy will be a reality by FY23 with wind and solar energy playing a key role.

As such, the success of Magnite may indeed stand as a highlight in Nissan's sales chart while also playing a key role in keeping all the cogs at the RNAIPL facility turning full time.