On behalf of the NHAI, a private contractor is attempting a world record for the construction of the longest bituminous concrete road on the Amravati-Akola National Highway in Maharashtra.
By : HT Auto Desk
| Updated on: 04 Jun 2022, 11:31 AM 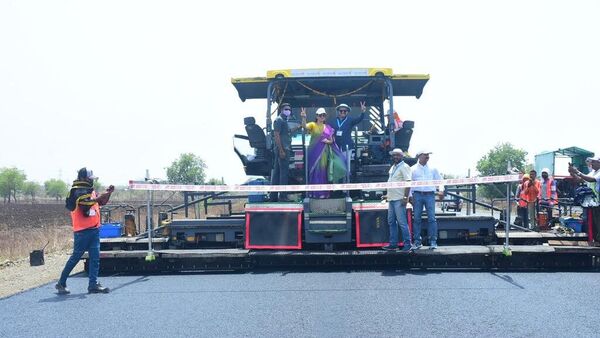 A private road contractor working for the NHAI has started work on Amravati-Akola National Highway in Maharashtra. The contractor is attempting a world record to build the 75-km highway in less than five days.

National Highway Authority of India (NHAI) is attempting a Guinness World Record of constructing the longest highway stretch in least time. The agency is currently busy constructing a new highway between Amravati and Akola in Maharashtra. A private contractor, called Rajput Infracon, is attempting the record by laying 75-km stretch between the locations in 108 hours, or less than five days. The record attempt has been undertaken on the occasion of India's Independence Amrut Mahotsav.

The ongoing construction for the record attempt, which began at 6 am on June 3, is expected to be completed by next week on Tuesday, June 7. If completed in promised time, this stretch will set a world record for the fastest construction of the longest bituminous concrete road. The agency has deployed around 800 employees and over 700 workers, including project manager, highway engineer, quality engineer, surveyor and safety engineer to get the job done.

Rajput Infracon is not new to such world record attempts. The same contractor had earlier constructed a road between Sangli and Satara in 24 hours, creating a world record.

The stretch being worked on falls on the National Highway between Amravati and Akola in Maharashtra. This stretch has been particularly in poor condition for more than ten years. Despite several attempts to award the repair work to at least two other contractors, the work never took off. Even Union Minister Nitin Gadkari had expressed displeasure over the slow pace of work between Amravati and Akola.

The NHAI is also keeping a close eye on the highway development work. It is scrutinising the quality of the road amid the world record attempt. Vilas Brahmankar, Project Director and General Manager at NHAI, said that the central agency will keep an eye on the quality of the work since such efforts also need a lot of support.