Home Auto News You Can't Drive At More Than 70 Kmph In Delhi Anymore. Here Is Why

You can't drive at more than 70 kmph in Delhi anymore. Here is why

Delhi Traffic Police has shared new speed rules for people driving in the national capital.Cars have been restricted to just 70 kmph speed on some of the key roads.Maximum speed for two-wheelers has been capped at 60 kmph.
By : HT Auto Desk
| Updated on: 11 Jun 2021, 14:02 PM 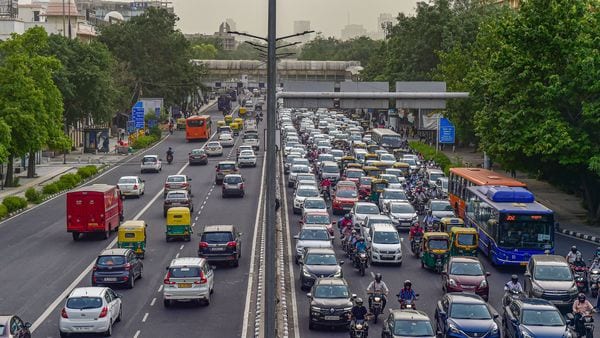 Traffic during evening rush-hour on a road in New Delhi. (File photo)

Speed limit in Delhi for vehicles have been capped at 70 kmph from now on. Delhi Traffic Police shared a government notification today which shares the new traffic rules, pertaining to speed of different kinds of vehicles.

According to the gazetted notice from the office of the Deputy Commissioner of Police, private four-wheelers like cars, jeeps and cabs will be liable for traffic penalty if they exceed 70 kmph speed limit anywhere in the city. The new traffic rules, shared by Delhi Traffic Police has listed such roads where vehicles can hit a top speed of 70 kmph.

Such roads include NH-48, which connects Gurugram and Delhi, DND flyover connecting Delhi with Noida, NH-44 that connect Delhi with Haryana at Singhu border, Noida Toll Road, NH-9 from Millennium Park to Ghaziabad border, NH-9 towards Tikri border, Ring Road Bypass and the road from Mahipalpur towards IGI airport.

Speed has been capped at just 30 kmph for all vehicles on all minor roads inside all residential areas, commercial complexes like malls, as well as service lanes.

Satyawan Gautam, Deputy Commissioner of Police/Traffic, said, "It is necessary to regulate the speed of motor vehicles on the roads of NCT of Delhi for the safety of motorists as well as other road users." The government has also announced a heavy fine for violating the speed limit. The speed limit for public and goods transport vehicle like three-wheelers, buses and trucks are now down to 40 kmph across the city, and on small roads, and within residential areas, it's down to 30 kmph for all vehicles."

The penalty for over-speeding in Delhi ranges between ₹2,000 and ₹4,000 depending on the type of vehicle. Speeding or racing on public roads is also an offence and may invite a fine of ₹5,000.