Mercedes steering wheel to be outlawed after this season

The new technology allows a driver to change the 'toe angle' of the front wheels into corners and on the straights by pushing and pulling on the steering wheel, rather than just moving it sideways.
By : Reuters
| Updated on: 22 Feb 2020, 09:41 AM 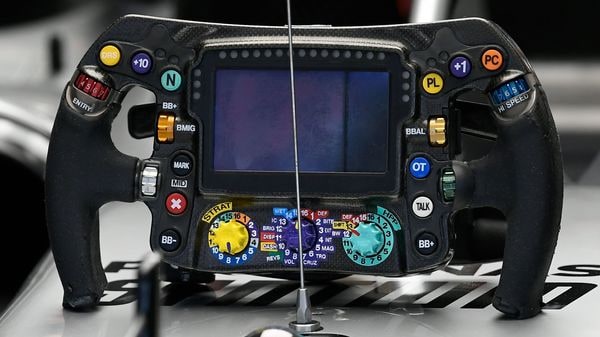 Mercedes' British driver Lewis Hamilton's steering wheel is pictured on top of his car during the tests for the new Formula One Grand Prix season at the Circuit de Catalunya in Montmelo in the outskirts of Barcelona on February 19, 2020. (Photo by LLUIS GENE / AFP)

Formula One's governing body has moved to ban for 2021 an ingenious new Mercedes steering wheel that has been the talk of pre-season testing and could boost Lewis Hamilton's chances of a record-equalling seventh title.

Race director Michael Masi pointed to a change in the technical regulations, published at the end of last year, that effectively ruled out future use of the DAS (Dual-Axis Steering) system.

"You have been very wise in noticing the change to the 2021 technical regulations," said the Australian when asked by reporters, confirming also that there were no safety concerns about the system.

The new rule decrees the "re-alignment of the steered wheels... must be uniquely defined by a monotonic function of the rotational position of a single steering wheel."

The DAS allows a driver to change the 'toe angle' of the front wheels into corners and on the straights by pushing and pulling on the steering wheel, rather than just moving it sideways.

Mercedes technical director James Allison had said on Thursday, when DAS made its track debut, that the system had come as no surprise to the FIA who had been kept informed along the way.

That observation suggested the rule change had been triggered by awareness on the governing body's part that the sport's dominant team had found a potentially game-changing loophole in the rules.

Whether or not that was the case, and how quickly rivals might be able to copy it and whether they might protest after the opening race, remained lively topics of conversation.

"I think we need to first obviously understand how it works and understand what would be the performance benefit," said Ferrari team boss Mattia Binotto. "I don’t think that at the moment we’ve got any idea."

Binotto conceded, however, that if Ferrari did want to do something similar it would likely take them until mid-season to introduce it.

"I'm sure it's highly complex and suspect they've taken a long time to work it out," he said. "You won't see (other) cars with it for quite some time."

Mercedes driver Valtteri Bottas, whose lap time on Friday was close to his own all-time record lap of the Circuit de Catalunya, said he had first heard about the project nearly a year ago.

"There's no issues so far with it, it's actually pretty easy to use," he said.

"When a team brings something new there's always going to be talk about whether it's legal or not. I don't think our team would start making and designing something that would get banned," added the Finn.

"I hope we can have an edge with that. How big the edge can be with that is a complete question mark."

Mercedes have won the last six drivers' and constructors' championships and Hamilton will be seeking to equal Ferrari great Michael Schumacher's record seven.