Under its Retail of the Future model, Mercedes retains ownership of its entire stock of cars, selling these in partnership with appointed franchise partners.
By : HT Auto Desk
| Updated on: 02 Dec 2021, 12:46 PM 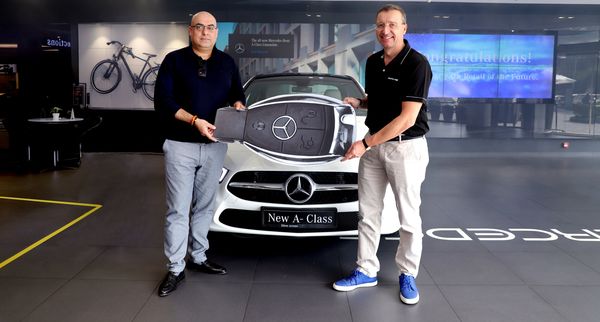 Martin Schwenk (Right) of Mercedes-Benz India is seen here handing over the keys of the 1,000th car sold under the company's ROTF model.

Mercedes-Benz India on Thursday announced the delivery of the 1,000th car under its Retail of the Future (ROTF) business model which was first announced in June. Under the ROTF model, Mercedes-Benz India retains the ownership of its entire stock of cars and sells cars in partnership with appointed franchise partners with the luxury vehicles being invoiced directly to the customer.

India became the fourth market in the world where Mercedes brought in the ROTF ‘direct to customer’ model. On Thursday, the company announced that the 1,000th unit - an A-Class Limousine, was handed over to a customer in New Delhi. “Delivering the thousandth Mercedes-Benz within a short span under the ROTF platform strongly validates our vision of reimagining customer excellence while empowering the franchise partners financially with this new business model," said Martin Schwenk, MD and CEO at Mercedes-Benz India. “It is particularly satisfying to witness our months of hard work bearing fruits in the form of successful implementation of ROTF and a high level of acceptance from our customers."

Under the ROTF model, Mercedes-Benz India is responsible for processing and fulfilling customer orders. Assuring price protection and transparency in sales process, the company had further highlighted the one nationally set price of its models with customers being provided a VIN number during the order booking stage.