Gulf Oil will supply lubricants to all McLaren cars and fuel optimised for high-performance engines.
By : HT Auto Desk
| Updated on: 29 Jul 2020, 08:53 AM 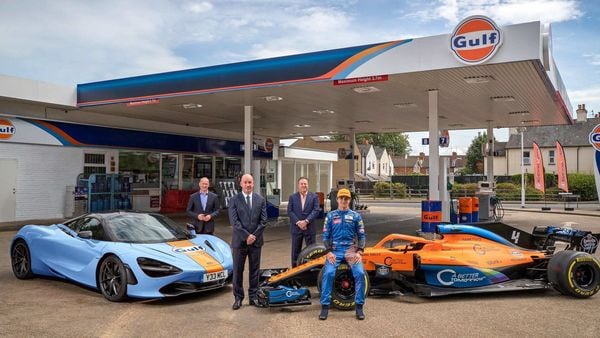 Gulf Oil brand will be integrated into the McLaren Formula 1 team from the British Grand Prix 2020.

McLaren and Gulf Oil have entered into a multi-year strategic partnership which will see Gulf Oil becoming the preferred lubricant supplier to the automaker and the racing team.

In a press release issued by Gulf Oil, it announced that it would supply lubricants to all McLaren cars and fuel optimised for high-performance engines. This would officially begin from 2021.

To launch the partnership, the Gulf Oil brand will be integrated into the McLaren Formula 1 team from the British Grand Prix 2020 on Friday 31 July – Sunday 2 August. The logo will be represented by McLaren F1 personnel throughout the 2020 F1 season. Lando Norris and Carlos Sainz as well as the McLaren pitcrew are included in this.

Interestingly, this is only a return to previous tie-ups as Gulf Oil and McLaren's association in F1 dates back to 1968 and till the end of the 1973 season. The partnership saw several wins on the race track - both F1 and Can-Am series. In the 1990s, the partnership was renewed for the Le Mans 24 Hours endurance race with McLaren F1 GTR sporting Gulf colours through the course of that decade. "We are delighted to welcome Gulf Oil back to McLaren and reunite two iconic brands back together in a new and exciting partnership," said Zak Brown, CEO at McLaren Racing.