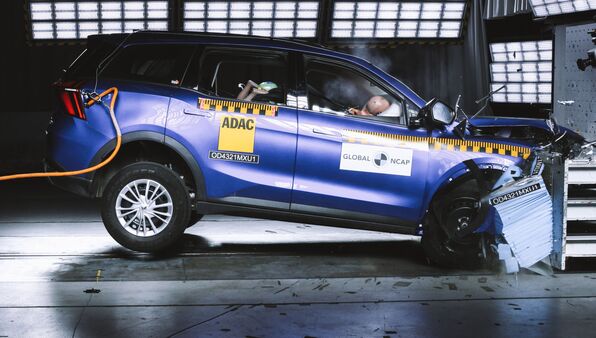 Safety crash test agency Global NCAP has revealed the latest crash test results under its #SaferCarsForIndia campaign under its current test protocols. The Mahindra XUV700 SUV, which had previously received a five-star safety rating, has now been given ‘Safer Choice’ award by the agency. Along with this, Global NCAP also revealed that Kia Carens scored three stars for adult occupant protection and three stars for child occupant protection. (Read full report)

The ‘Safer Choice’ title is only awarded to models achieve high levels of safety performance and meet certain criteria including offering Electronic Stability Control (ESC) and meeting performance requirements according to United Nations Regulations UN13H, UN140 or GTR8. The model must have achieved a five-star score for adult occupant protection and at least a four stars in child occupant protection as per the latest version of the Global NCAP New Market Test protocol.

Other criteria include meeting Pedestrian Protection requirements according to United Nations Regulations UN127 or GTR9, which must be validated on market units at a Global NCAP designated testing laboratory.

This is Mahindra's second ‘Safer Choice’ award with the first one being given to the company in 2020 for the XUV300. The model had achieved a five star safety rating for adult occupant protection and four stars for child occupant protection. “Global NCAP congratulates Mahindra on its second ‘Safer Choice’ Award and for the wider inclusion of ADAS technologies," said Alejandro Furas, Secretary General of Global NCAP.