Ford Motor CEO Jim Farley declared that Ford has stopped taking reservations for the upcoming F-150 Lightning electric pickup truck.Ford initially had plans to produce around 70,000 to 80,000 units of the new electric truck a year.
By : HT Auto Desk
| Updated on: 10 Dec 2021, 10:12 AM 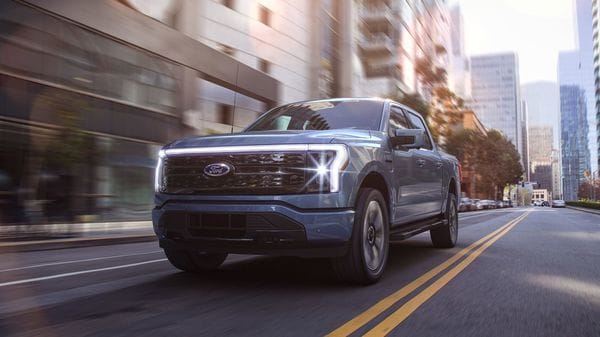 Ford has stopped accepting reservation orders for its F-150 Lightning EV after the number of orders touched a massive two lakh recently. This was comfirmed by Ford Motor CEO Jim Farley.

According to Farley, Ford initially had plans to produce around 70,000 to 80,000 units of the new electric truck a year. The plan is now set for an update because of the high number of orders with Ford aiming to manufacture double the stated amount in the next two years. Taking a dig at Tesla's CEO Elon Musk who, years ago, decided to expand production by adding a tent to the company's Fremont factory, Farley stated that Ford does not want to produce these electric pickup trucks in tents. “We want to build them at the Rouge" factory near Ford's headquarters in Dearborn," he said.

(Also read | With Tesla and Volkswagen on EV podium, it's Ford vs GM for third spot)

An earlier report said that the automaker is also working on a new electric vehicle that will be based on an all-new full-size pickup platform. Details at present are sketchy at best. What isn't sketchy though is Ford's determined push in the world of electric mobility

(Also read | Ford issues safety recall for 115,000 vehicles in US: Which models are affected?)

With its plans to double the production capacity of electric vehicles to six lakh per year by 2023, Ford is focused on its electrification goals as it is putting in more effort to take on rival companies such as Tesla and Volkswagen. Last month, Farley took to Twitter to announce this plan. “We are now expecting to produce 600,000 electric vehicles per year globally by end of 2023. 2x our original plan. And that’s before Blue Oval City and other EV sites coming online," he stated in his tweet. Blue Oval City is the new factory that the company has declared along with three new battery gigafactories. The new plant is expected to start manufacturing in 2025.