Lewis Hamilton had finished 2010 F1 seasons at fourth spot with three wins.F1 cars are hardly ever auctioned. This means that this particular F1 car could be an extremely prized possession.
By : HT Auto Desk
| Updated on: 24 May 2021, 11:32 AM 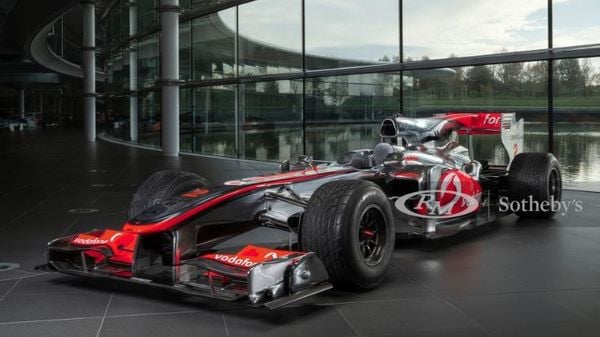 In what could make it one of the most expensive Formula 1 cars ever to be auctioned, a McLaren-Mercedes race car - driven by Lewis Hamilton in the 2010 F1 season - has been put up for sale by RM Sotheby Auctions and is expected to fetch around $5 million.

Reports suggest that the MP4-25A F1 car is currently stationed at McLaren's HQ at Woking in England but could soon find a new home if it is bought during the auction process. The winner, quite obviously, could look forward to a prized possession, one that is powered by a 2.4-litre naturally-aspirated V8 petrol engine. At just 620 kilos, the F1 car has a carbon-fibre honeycomb composite monocoque. "The McLaren Mercedes represents a car that can still be track driven and supported by the original factory teams as part of individual Heritage departments," states Sothe

F1 cars in auctions are a rarity which is also what could make this particular model hotly fought for. Hamilton's F1 cars for Mercedes-AMG, his current employers, are mostly kept by the team. "While client confidentiality precludes disclosing exactly how many exist in private ownership, it’s believed to be only a scarce few," the listing states. "Formula 1 and RM Sotheby’s have created the ground-breaking concept to sell this incredible car live while it is being driven around the historic Silverstone circuit at speeds in excess of 150 mph."

Hamilton had finished the 2010 season at fourth spot, with 240 points. This included three wins and nine podium finishes overall. It was Sebastian Vettel in his Red Bull that took the crown that year, followed by Fernando Alonso and Mark Webber.