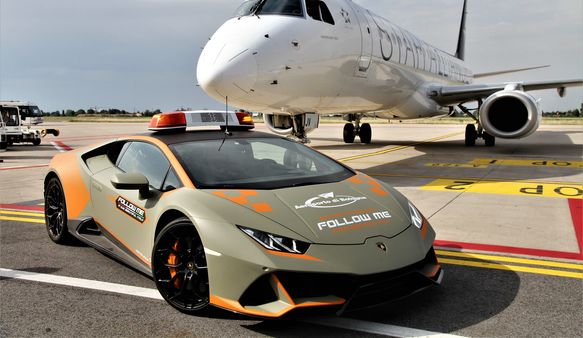 Lamborghini has delivered a Huracán EVO sports car to the Bologna Guglielmo Marconi Airport in Bologna, Italy to serve as a new follow-me car at the premises. The carmaker has renewed its partnership with the airport authorities for the seventh time with the new vehicle.

The Lamborghini Huracán EVO will guide the arriving and departing aircraft to and from the parking apron and taxiway until January 7, 2022. The follow-me car dons a livery specially designed by Lamborghini Centro Stile for the role. The checkered design in Arancione Matt is reminiscent of the operating vehicles in aircraft maneuvering areas. The exterior features lettering that reads, "Follow Me in Our Beautiful Country", highlighted by the Italian flag.

The car is also equipped with flashing warning lights and a radio connected to the airport control tower. Specially trained airport staff will guide the arriving flights in the follow-me supercar.

The new Huracán EVO follow-me car, with a more attention-grabbing Italian flag livery, will replace its predecessor - another Huracan Evo. The new vehicle gets an aspirated 640 HP, 5.2-liter V10 engine. 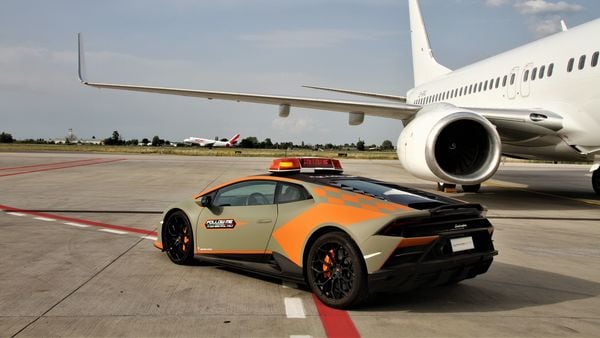 The new Lamborghini follow-me car at the Bologna Airport

Lamborghini has given Bologna various liveries for its follow-me cars in the past, one being a bright yellow livery in 2016 on a Huracán. Besides the eye-catching color, the Huracan also featured a chequered flag design across the front and back as well as an outline of the Bologna skyline down the sides. A light bar was added to the standard spec Huracán to perform its duties of a follow-me car.

In 2013, Bologna the Airport got a Lamborghini Aventador as a follow-me car. This vehicle wore a white and red theme with the necessary details including a 'follow me' sticker. Chequered pattern was depicted as is standard on all other follow-me cars.