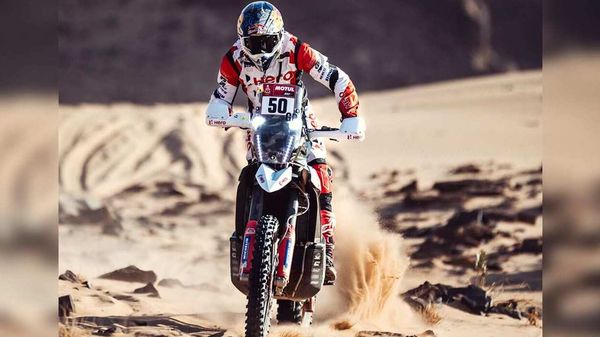 The incident occurred on the same stage where last year, Hero MotoSport rider Paulo Goncalves died while competing in the Dakar 2020.

Renowned Indian motorcycle racer CS Santosh suffered a crash during the ongoing Dakar Rally in Saudi Arabia and was put in a medically-induced coma after being airlifted to a hospital in Riyadh.

The 37-year-old Santosh, who was representing Hero MotoSports in one of the world's biggest rallies, suffered the crash on Wednesday.

"We are pleased to share that he has no major physical injuries except for the dislocated right shoulder and head trauma. The latest scans have also shown no major issue that could impact his full recovery," Hero MotoSports said in a statement.

"The medical team attending to him have decided that the best approach to manage the injury is to reduce the body functions to a minimum and keep him in a sedated condition or an artificial coma.

"He is receiving the best possible medical care and will continue to be under constant observation for the next few days," it added.

According to reports, he was conscious when paramedics arrived on the scene before he was rushed to Riyadh.

The incident occurred on the same stage where last year, Hero MotoSport rider Paulo Goncalves died while competing in the Dakar 2020. Hero MotoSport withdrew from the rally after the death of Goncalves.

Santosh crashed around 135km into the stage on a gravel track and had to forfeit the stage.

This was Santosh's seventh attempt at the Dakar Rally, considered the world's most gruelling off-road motorsport event.

He was the first Indian to complete the race in 2015, and replicated the effort in two further editions.

Santosh had a near-fatal accident during the 2013 Abu Dhabi desert challenge, suffering burns to his neck after his Suzuki MX450X caught fire.

The January 2-16 rally divided into 12 stages has competitors traversing 7646km. Stage 4 is, incidentally, the longest stage of the rally, spanning a total of 813km.