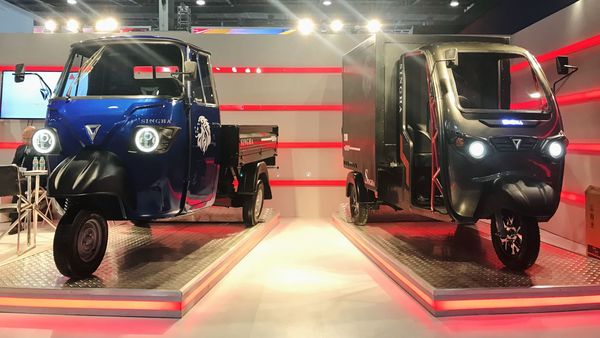 With electric mobility passenger vehicles and two-wheeler space gaining traction in India, it was only a matter of time before cargo three-wheelers jumped on the bandwagon. On Friday at Auto Expo 2020, Omega Seiki Private Limited showcased Singha and Singha Max which make use of electic power to cater to the needs of the B2B and e-commerce industry.

Powered by Li-ion battery which can be swapped, Singha and Singha Max have a range of 100 kilometers on a full charge - all while carrying loads of up to 500 kilograms. The two cargo vehicles have top speeds of 45 kmph and 60 kmph, respectively. Singha reportedly takes two hours to power up to max under standard conditions while Singha Max takes an hour longer.

Omega Seiki says the 48v battery helps the two vehicles achieve a maximum torque of 80 Nm. In the Singha, the instrument cluster is embedded with an App to capture data through telematics and cloud computing on vehicle positioning, running and mileage data, best route tracking, etc. Deb Mukherji, Managing Director, Omega Seiki, said that the entire project has been onceived with Make in India and Build in India objectives in mind. "As the Indian auto market is aiming towards E- powertrain future we are here with eco-friendly mobility solutions offering 0.5 / Km low cost running- the best option for SMEs and startups," he said. "All the components of the vehicles are manufactured & sourced in India except for Li-ion battery cells."