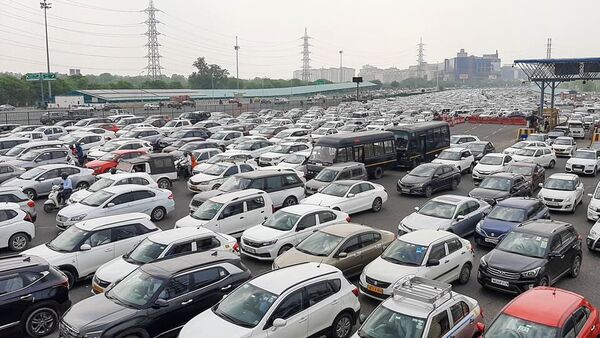 File photo of vehicles stuck in Delhi-Gurugram Expressway used for representational purpose only.

The data further revealed that there were 2.95 lakh two-wheelers and 18.47 lakh four-wheeler and above category of vehicles with fuel types of CNG, ethanol, fuel-cell hydrogen, LNG, LPG, solar, and methanol, among others.

Replying to a separate question about development and maintenance of National Highways, Gadkari said that the Ministry of Road Transport and Highways (MoRTH) is primarily responsible for these highways, which are generally maintained in traffic-worthy condition.

These highways undergo damages from time to time, especially during rainy season, and get affected due to flooding, landslides, heavy downpour, etc. But the MoRTH makes sure that the restoration work is promptly carried out and traffic is restored to normal within a stipulated time frame. Gadkari highlighted that development and upgradation of National Highways is a continuous process.

In a separate development, Gadkari last month layed the foundation stone for as many as five road projects worth a total of ₹2,300 crore. Apart from the obvious benefit of a smoother and quicker road movement, the projects are also being touted as a major source for employment during the construction phase and would attract investments once complete.