The announcement comes a day after Prime Minister Narendra Modi said that Kevadia, which houses the world's tallest Statue of Unity, will become the country's first electric vehicle city.
By : HT Auto Desk
| Updated on: 07 Jun 2021, 09:37 AM 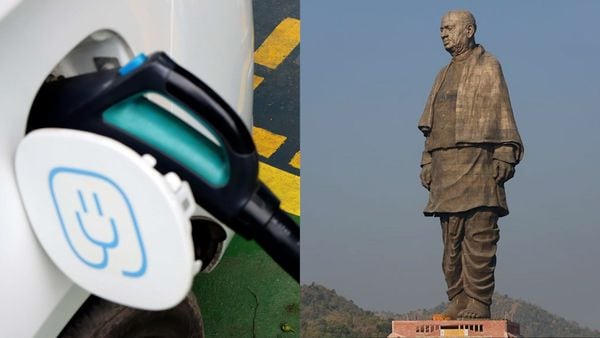 Gujarat's Statue of Unity area is all set to become India's first electric vehicles-only zone. A day after Prime Minister Narendra Modi announced the move, the Statue of Unity Area Development and Tourism Governance Authority (SOUADTGA) has said it will develop the area, situated in Gujarat's Kevadia, into a zone free from vehicular pollution.

The authority issued a statement on Sunday saying that the area around the 182-metre tall Statue of Unity in Kevadia will be transformed into an electric-vehicles-only zone in a phased manner. "In the area under the authority, only electric vehicles will be allowed to ply, with the buses made available for tourists also running on battery power instead of diesel," it said.

On Saturday, Modi had said that steps are being taken to run only battery-based buses, two- and four- wheelers in Kevadia in future. However, even before this announcement, Prime Minister Modi had decided in 2019 to give priority to electronic vehicles only in Kevadia.

According to the plan, local residents living around the statue of Sardar Vallabhbhai Patel will get assistance to buy electric three-wheelers. The SOUADTGA said it will also provide subsidy for buying electric vehicles.

"The beneficiary officers/employees will have to pay the amount other than subsidy, and facilities will be provided to deduct the amount of loan from their salaries in easy instalments. Beneficiaries will have to guarantee that they will not operate petrol-diesel vehicles in the area," SOUADTGA said.

According to the agency, at least 50 e-rickshaws will be allowed to ply in the area under the authority initially. Women will get preference as the drivers of these e-rickshaws. The women drivers will be given free training at the Skill Development Center at Kevadia. A separate workshop and charging station will also be set up in the area.

The agency has also asked the company operating the e-rickshaw in the area to develop a smart mobile app which will mention the fares for these e-vehicles besides other information on tourist attractions.

"It may be mentioned here that there are no polluting industries at Kevadia, and there are two hydroelectric power plants, which generate abundant environment-friendly electricity. Reserving the area only for electric vehicles will reduce air and noise pollution and add a feather to the charm of this unique tourist destination," SOUADTGA said.

The country's first electric vehicle tourism initiative was launched in Kevadia. Eco-friendly eBikes were also launched there. The fare for two hours is 1500 rupees.